"What Are The Facts?" 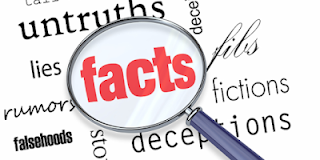 “What are the facts? Again and again and again – what are the facts? Shun wishful thinking, ignore divine revelation, forget what “the stars foretell,” avoid opinion, care not what the neighbors think, never mind the un-guessable “verdict of history” – what are the facts, and to how many decimal places? You pilot always into an unknown future; facts are your single clue. Get the facts!”
- Robert A. Heinlein
“It seems to me what is called for is an exquisite balance between two conflicting needs: the most skeptical scrutiny of all hypotheses that are served up to us and at the same time a great openness to new ideas. If you are only skeptical, then no new ideas make it through to you. On the other hand, if you are open to the point of gullibility and have not an ounce of skeptical sense in you, then you cannot distinguish the useful ideas from the worthless ones.”
- Carl Sagan
And always remember...
"When you have eliminated the impossible, whatever remains,
however improbable, must be the truth."
- Sir Arthur Conan Doyle, "Sherlock Holmes"
Hey, who lied and told you any of this was easy?
Posted by CoyotePrime at 3:11 PM