"The rim of the large blue galaxy at the right is an immense ring-like structure 150,000 light years in diameter composed of newly formed, extremely bright, massive stars. AM 0644-741 is known as a ring galaxy and was caused by an immense galaxy collision. When galaxies collide, they pass through each other and their individual stars rarely come into contact. The large galaxy's ring-like shape is the result of the gravitational disruption caused by a small intruder galaxy passing through it. When this happens, interstellar gas and dust become compressed, causing a wave of star formation to move out from the impact point like a ripple across the surface of a pond. 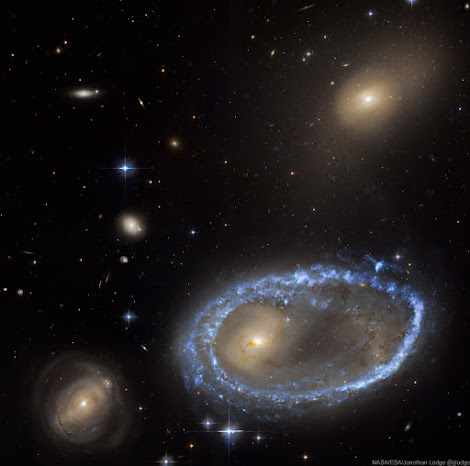 Other galaxies in the field of view are background galaxies, not interacting with AM 0644-741. Foreground spiky stars are within our own Milky Way. But the smaller intruder galaxy is caught above and right, near the top of the frame taken by the Hubble Space Telescope. Ring galaxy AM 0644-741 lies about 300 million light years away toward the southern constellation Volans."
- https://apod.nasa.gov/apod/astropix.html
Posted by CoyotePrime at 4:21 PM