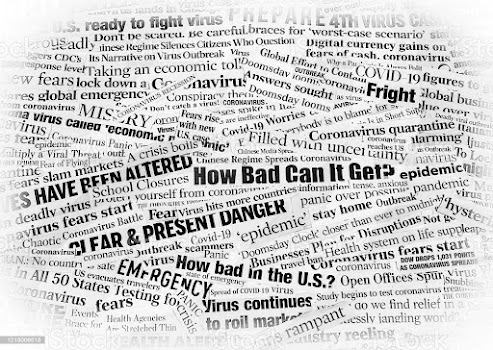 "Things Get Ripe"
by Jim Kunstler
"Besides trying to just live their lives in these days of socioeconomic meltdown, which, Gawd knows, is hard enough, the people can barely sort out the seemingly malevolent intentions of the folks in-charge of the monster that government has become. And so, the question arises: are they actually trying to kill us all, or are they so corrupt and stupid that everything they touch falls apart? In other words, is it mastermindery or clusterf**kery?
On the former side, you have that gallery of international villains out of the James Bond playbook: Bill Gates, Klaus Schwab, and George Soros - megalomaniacs armed with mega-money, a sho’nuff recipe for trouble - representing the emergence of a world-saving regime, in concert with lackey national leaderships. Their narrative goes like this: humans have over-replicated, like maggots in a trash can, they’re wrecking the planet and gobbling (our) resources, and we must find a way to get rid of them that looks like a natural catastrophe so the hidden powers-that-be-don’t get blamed for pulling a global Auschwitz. Hence Covid-19 and the sketchy vaccinations. (“The Great Reset.” You will be dead and you will like it!)
I must say, I don’t go for that story, even if that trio have played their parts in some wicked doings du jour. Rather, I subscribe to the latter scenario: the likelihood that we’re in a pile-up of quandaries that we can only pretend to manage, and that all our pretenses of control and management only make things worse, while making a mockery of human ingenuity. This does not rule out an element of personal greed and attempted power-mongering, but look, for instance, at where all that has left the hapless Dr. Tony Fauci.
Not only did he finance the development of the Covid-19 virus so he could heroically bring forth a super-vax to the awe of mankind, and gain a niche in the pantheon of Great Men in History (plus make a buck on his share of the vax patents), but he screwed up the public health messaging so badly that Science itself now looks like a mere evil racket instead of the great achievement it used to be. His reputation is shot and he could end his days in an orange jump suit doing Chinese fire drills up and down the exercise court at Lewisburg Federal Penitentiary.
Anyway, the Covid-19 story is now utterly unraveling and the official actions around it look desperately idiotic. It’s back to mass mask-ups and maybe even lockdowns. But don’t get the idea that those mRNA vaccines turned out to have a short half-life — though it kind of looks like they did. In which case, why the panicky rush to get absolutely everybody vaxed up? And how’s that working? I’ll tell you how: only with last-ditch attempts at totalitarian intimidation… you will have no rights to earn a living, go out in public, buy anything, or even protest on the street about any of these insults to human dignity.
The world has never seen the launch of such a gigantic lead balloon. All week, the hysteria has been building and now the balloon is falling to earth as the CDC prepares to announce that the vaxes are a bust against the “Delta variant” and it’s back to the drawing board for all the toiling myrmidons of Big Pharma. Did House Speaker Nancy Pelosi get some insider info on this, having appointed herself mask-sheriff of the US Capitol Building, threatening now to arrest non-masked members and their staffers. Indeed, even a few fully-vaxed-up congresspeople were moved to shout, “Hey wait a minute.”
Mrs. Pelosi, meanwhile, is busy orchestrating her national sob story to prove that half the country are domestic terrorists for trespassing in her office and need to be cancelled, especially the former president behind that dastardly “insurrection” — against whom criminal referrals will be shortly forthcoming to Merrick Garland’s Department of Justice. As if… one can only think.
As if, that is, the half of America not lost in the transports of Wokery and fantasies of half-assed communism are going to roll over for it. Please, pull the pin on that grenade, Nancy, you demented, deliquescing old jade! America has had enough of you, and your mendacious machinations, and of your sidekick, the sham president “Joe Biden” and his pitiful mummeries in the service of a claque that wants to destroy what little remains of the public interest and our national honor. You have no idea, Nancy, how all this is going to blow up in your face and leave you a figure of historic odium.
Meanwhile, events churn relentlessly in the background… especially the bankruptcy of America (the Western World, really), and the unappetizing effect that will have on our standard-of-living… and the terrifying momentum of election audits that will prompt a national crisis of confidence as summer stumbles into fall… and drought, crop failures, supply-line breaks, and food shortages coming down… and hundreds of thousands of third world mutts jumping the southern border… and the very real possibility that China will just go ahead and snatch Taiwan while our pussified US military hollers “no fair” from a safe distance….
I tell you, this is some ripe moment. We are spinning into pandemonium. The vacuum of leadership is awesome, as if Gawd himself has split the scene in utter disgust and left matters to the ancient furies."
- https://kunstler.com/
○
Related:
"Cascade Of Consequences"
Posted by CoyotePrime at 8:18 AM