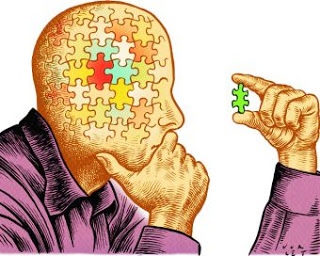 “Thinking About Thinking”
by Chet Raymo
“It is not easy to live in that continuous awareness of things which alone is true living," wrote the naturalist Joseph Wood Krutch. And, of course, he was right. Our brains are separated from the world by a permeable membrane. Attention flows outwards. Sense impressions flow inwards. Of this two-way traffic- this awareness- we create a soul.
At this moment, as I sit at my desk on a hillside in the west of Ireland, I try to be aware. Sunlight streams across my computer keyboard; eight minutes ago these photons were on the surface of the sun. A Pholcus phalangioides spider spins its web under the shelf above the desk; I touch the web with a pencil point and the spider does a dervish dance. Outside the window, clouds scud in from the Atlantic; there will be rain in the afternoon.
Continuous awareness: It can be exhausting. Which is why, I suppose, we sometimes wish for the mind to go blank, for the windows of the soul to close, for darkness to fall. Fortunately, the one thing we don't have to attend to is awareness itself. The brain does its thing without the least bit of conscious control on our part. And a good thing, too; if we had to attend to what is going on in the brain when we attend to the world, we'd... We'd go nuts.
Nothing we know about in the universe approaches the complexity of the human brain. What is it? A vast spider web of neurons, cells with a thousand octopuslike arms, called dendrites. The dendrites reach out and make contact at their tips with the dendrites of other cells, at junctions called synapses. A hundred billion neurons in the human brain, with an average of 1,000 dendrites each. A hundred trillion octopus arms touching like fingertips, and each synapse exquisitely controlled by the cells themselves, strengthening or weakening the contact, building webs of interlinked cells that are knowledge, memory, consciousness- self.
A hundred billion neurons. That's more brain cells than there are grains of salt in 1,000 one-pound boxes of salt. A roomful of salt grains, floor to ceiling. Each in contact with hundreds, thousands, or tens of thousands of others. The contacts flickering with variable strength. Continuously. Unconsciously. Never ceasing. Remembering. Forgetting. Feeling joy. Feeling pain. Thinking. Speaking. Lifting a foot, moving it forward, putting it down again. Flickering. A hundred trillion flickering synapses. Just thinking about it is exhausting.
Neuroscientists are busy trying to figure it all out. Some folks would say that bringing the scrutiny of science to bear upon the human soul is the height of presumption. Others would say that the more we learn about what makes our brains tick, the more we stand in awe at the mystery of soul.
The sheer complexity of the human brain makes any adequate description a daunting task. Which is why some neuroscientists choose to work with simpler organisms- sea snails, for example- to get a grip on the basic structure and chemistry. In recent years, new scanning technologies enable neuroscientists to watch live human brains at work. Active neural regions flicker on the screens of computer monitors as subjects think, speak, recite poems, do math. Continuous awareness, displayed on the screen of a scanning monitor, can look like a grass fire exploding across a prairie.
Still other scientists attempt to model the brain in silicon, building electronic circuits called neural networks that mimic the activity of the brain as it creates constantly changing webs of neurons. So far, no electronic network begins to approach the complexity of the human brain, but the time is not far off when silicon brains will rival brains of flesh and blood. Just trying to make it happen teaches us a lot about how human brains work.
Perhaps the most exciting research is that of the scientists who study the biochemistry of neurons: How do the cells regulate synaptic connections to build new neural webs? One big surprise is just how much of the "thinking" of neurons is done by the dendrites, those hundreds of spidery arms that connect neurons to one another. DNA in a neuron's nucleus sends messenger RNA down along the dendrites to active synapses, where they are translated into proteins that regulate the strength of synaptic connections. Tiny protein factories in the dendrites are apparently key to learning and memory. Once the regulation of these protein factories is understood, drugs that ameliorate some kinds of hereditary mental retardation might be possible. As will drugs that help all of us to learn and remember. Are we ready for "smart" pills? Memory pills?
What all this amounts to is awareness of awareness. For the first time in the history of consciousness, the machinery of awareness has been turned upon itself. As neuroscientists have discovered, thinking about thinking is not easy. Thank goodness we don't have to think about thinking to think.”
- http://www.sciencemusings.com/
Posted by CoyotePrime at 2:59 PM