A Comment: The conclusions drawn in this lengthy article will shock, horrify and enrage you, seemingly so mind-numbingly insane that they couldn't be possible. Incredibly, astonishingly, I personally believe this narrative to be the truth. Please research this yourself and draw your own informed opinions as to its validity. - CP 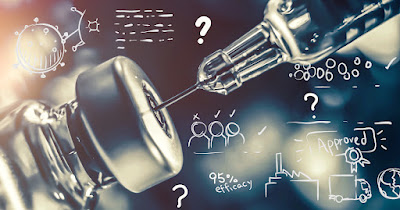 "2021 - The Year Of The Mass Poisoning" (Excerpt)
by Clive Maund
"We have come to the end of a Grand Supercycle that was marked by both debt and population being stretched to their absolute limits. With the debt bubble set to implode after a desperate last gasp run into hyperinflation, the world population which had been enabled to grow to extreme levels by debt expansion, is set to crash and it is clear from their actions of the past couple of years that the ruling elites have decided to take full control of this process and accelerate it dramatically with lockdowns designed to destroy the world economy and a genocidal forced experimental mRNA gene therapy program intended to eliminate a large percentage of the world population.
2021 will go down as one of the darkest, if not THE darkest year in the entire history of the human race for this is the year when the narrow clique of plutocrats who have acquired immense wealth and influence and now control the planet actively implement their long formulated plan to exterminate a large percentage of the population and transform those who survive into compliant transhuman slave bots who can be remotely controlled, with ownership of the assets of the entire population being in due course transferred to the elite ruling class.
Human history and not just human history but the history of the world itself is defined by epochs which are long periods having unique characteristics that don’t change very much, which eventually end by transitioning into another epoch, sometimes suddenly, a simple example being the epoch of the dinosaurs being abruptly ended by the impact of a massive meteor. We have just witnessed the end of such an epoch which ran from the end of the 2nd World War up to the end of 2019 when it was terminated by the activation of the global elites’ Master Plan. This last epoch which ran for almost 75 years was an era of unprecedented freedom peace and prosperity for many, especially across the Western world, that has now ended, and we are now in a cathartic transition phase into a new epoch that many will not live to see.
The precipitating factors leading to this transition are the critical instability resulting from a global economy fuelled by unsustainable debt expansion coupled with massive overpopulation which are both set to implode and collapse. What is happening is that the global ruling class have decided to take control of this implosion and collapse, hence their euphemistic, lofty and endearing term for it “The Great Reset”. What we are now seeing unfold is the collapse of civilization into a barbaric brutal dystopia, with the resurrection of a feudal society which in many respects will be much worse than the Middle Ages because of the level of control available to the ruling class through technology that will allow round the clock non-stop control of the minds and bodies of the surviving peasants. If Kenneth Clarke were still around he could make a sequel to his epic TV series called “Civilization” which would be named “The Collapse of Civilization” although it probably wouldn’t need to run to 13 episodes like the original.
In this article I am going to refrain from adopting the usual “them and us” approach which is the custom of most writers and instead attempt to adopt an impartial objective approach as if we are curious visitors from another planet attempting to figure out what is going on. Thus, we will strive to see things from the perspective of those in control of society and also from the larger perspective of the Earth itself and the future of its plants and animals and general ecosystems. Henceforth we will refer to the elite ruling class of plutocrats as the NWO, short for New World Order both for brevity and because that is what they have long stated that they want to create."
Please view this complete, lengthy, critically important article here:
- https://www.clivemaund.com/article.php?id=5924
○
Related, essential:
"Unthinkable Thoughts"
Posted by CoyotePrime at 11:49 AM