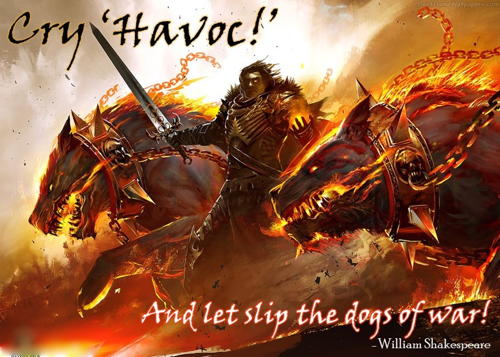 "Creepy Missions"
by Bill Bonner
NORMANDY, FRANCE – "'CovertAction' magazine reports: “Our Mission is to Lead the White Races of the World in a Final Crusade… Against Semite-led Untermenschen [subhumans]” That is a quote, allegedly from members of the Azov Battalion – a National Guard unit in the Ukraine – who didn’t like their country’s cozy association with Russia. Meanwhile, Hillary Clinton, Susan Rice, and Samantha Power, top members of Obama’s foreign policy team, had a mission, too – to turn the Ukraine away from Russia and towards the U.S. They lost patience with the democratically-elected government and threw American support behind the anti-Semite insurgents.
Dogs of War: Everybody’s got a mission. And here’s Thomas Dobbs… another man with yet another mission. He’s running out of patience, too: “I’m frustrated, I’m mad, I’m upset. I’m depressed…” he told Bloomberg. The poor man sounds like he may soon become an active shooter, too. He’s upset because the people of Mississippi are doing what they want to do, not what he wants them to do.
The story begins with a now-familiar line: "U.S. Doctors Lose Patience as They Confront Vaccine Hesitancy." "In Mississippi, for example, which has the lowest vaccination rate in the country – 36% – nearly a quarter of the doses go unused. Thomas Dobbs, an officer in the state’s health department, told a press conference in late July of feeling helpless as the delta variant spreads."
This week, we’ve been hacking through the weeds and willows to get a glimpse of the Brave New World of tomorrow. It is a “mission economy,” we fear… where the customary rules of a consensual, win-win, live-and-let-live society are suspended. You’re either with us… or against us. Friend or enemy.
The elite in Macron’s France… as well as “Biden’s America”… believe they have the TRUTH. It gives them a sense of “public purpose”… a mission. And like “abracadabra,” the mission opens the checkbook… gone are the normal concerns of matching income to outgo… challenge to response… and punishments to crimes. Cry havoc… and let slip the dogs of war!
Stones on a Blasphemer: The elites are running out of patience. No more letting people do what they want. They call in the police… the military… taxes… student loans… and firehoses – everything can be brought to bear, coming down on the nay-sayers like stones on a blasphemer. And the mission creeps.
French president Emmanuel Macron and Christine Lagarde, head of the European Central Bank, have been very clear. No more trying to return to normal. They aim to “transform” the economy from one that serves the interests of individual citizens to one that serves their mission.
An interview with the leader of France’s Green party, Delphine Batho, helps us understand what comes next. The Figaro reports: "I want to start a new approach that connects ecology to security, that assumes an [intentional] anti-growth and makes ecology one of the core functions of government [along with courts and police]. We must assume a vision for government that is completely ecologist, feminist, antiracist, and secular."
Anti-growth is the reduction of production and consumption for goods and services in order to get back to an equilibrium. …today we are in a situation of dis-equilibrium between the necessities of life and the preservation of the climate …and this can lead us to catastrophes and even a collapse. This is not a menace for the future. It’s a menace now. Anti-growth is a clear rupture with consumerism and productivity. What’s her mission? To make us all poorer!
Mission Mongers: In other words, Dear Reader, you will have to watch your step. Cut down a tree and you could be accused of terrorism (“ecology is security”)… and you’ll have to learn to walk backward… with a lower standard of living… accepting less of what you want so that Ms. Batho can get more of what she wants.
And what if the mission fails? So what if your troops get chased from Vietnam… your armies leave Afghanistan to the Taliban… poverty kicks your butt… and drugs take a victory parade? What do the mission mongers care? So what if an “anti-growth” agenda makes poor people poorer and reduces lifespans? The elite will be just fine.
So what if the industrial heartland has turned into a wasteland? They still have their comfortable homes in prosperous Bethesda or Falls Church. Five percent inflation? Their stocks are up 50%! And who cares if Black neighborhoods become zombie zones? The mission mongers can still get their cappuccinos and sink into their cushy desk chairs at the Center for a New American Security… or the Center for American Progress…making plans for the next campaign… and the next creepy mission."
- www.rogueeconomics.com
Posted by CoyotePrime at 1:54 PM