"The Science of Why We Repeat Mistakes" 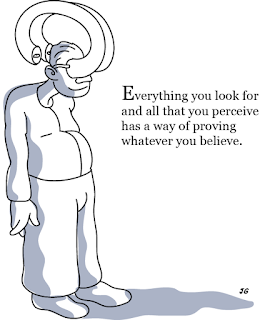 "The Science of Why We Repeat Mistakes"
by The Hutch Report
"History has shown us that we have made many, many mistakes as a society. It has also demonstrated that we tend to repeat previous mistakes made, despite our better judgement. “But why do so many people make the same errors over and over again?” This was the question asked in an article published in The Atlantic.
Procedural memory or Process memory is a part of your long-term memory. It is responsible for knowing how to do things. It is considered a subset of, what is sometimes referred to as, your subconscious memory. Memory is basically nothing more than the record left by a learning process. Thus, memory depends on learning. But learning also depends on memory. The knowledge stored in your memory provides the framework to which you link new knowledge by association.
When we do something repetitively it gets recorded into our neural pathways. The brain is not able to tell whether or not we are forming a good habit or a bad habit. Our neural pathways are therefore created for both positive and negative behaviors, depending on where you place your focus. Our brains see a repeated action, whatever it may be, and creates a pattern. It automates that action appropriately for the next time. This allows us to save energy.
A study by Johns Hopkins, published in the 'Journal of Current Biology', showed that a subject’s attention towards a previously reward-associated stimuli was positively correlated with the release of dopamine. “Dopamine released within the caudate and putamen is known to underlie habit learning and the expression of habitual behaviors.” This means that there is evidence that our brains are wired to pay attention to things that were once rewarding, even if they aren’t anymore.
We tend to fall victim to a number of human biases that dominate the direction of our thinking. The Ego Effect, or Egocentric Bias can lead us to keep making the same mistakes over and over again. Example, someone who is highly skilled in a certain expertise may struggle to imagine the perspective of others who are more unfamiliar with it.
In 1987 we experienced Black Monday in the US as the stock market fell precipitously. As Investopedia recounts, “There were some warning signs of excesses that were similar to excesses at previous inflection points. Economic growth had slowed while inflation was rearing its head. The strong dollar was putting pressure on U.S. exports. The stock market and economy were diverging for the first time in the bull market, and, as a result, valuations climbed to excessive levels, with the overall market’s price-earnings ratio climbing above 20. Future estimates for earnings were trending lower, but stocks were unaffected.”
During the savings and loan crisis, the US experienced the failure of 1,043 out of the 3,234 S&L banks from 1986 to 1995. It is believed that the failure began with inflation that started in the 1960s, which led to Paul Volker, U.S. Central Bank Chairman at the time, to raise interest rates. Mortgage rates eventually topped out at 18.45%. This helped bring on a recession which saw the beginning of the S&L crisis. Deregulation of the industry, combined with regulatory tolerance, and fraud worsened the crisis.
During the 1990s, we experienced a Finnish, Swedish and British banking crisis. In 1997, we experienced the Asian financial crisis. 1998 saw the Russian financial crisis, followed by the Ecuador and Argentinian financial crises in 1998-1999.
In 2008, we experienced a financial crisis that ravaged the economy and engulfed the country and the world. The government and the Central Bank intervened with a number of bailout programs, which saved the banks, stabilized the financial system and corporate America. Not surprisingly, the combination of regulatory tolerance and fraud allowed the banks freedom to do as they wished, and worsened the crisis…..once again.
Having the Central Banks and Governments backstop every poor practice perpetrated by financial institutions has, time and time again, created a situation of “moral hazard.” This essentially means that if you are confident somebody will bail you out, you will have a tendency to risk as much as you possible can.
In addition, financial institutions are looking for that dopamine hit. As we previously described from the Johns Hopkins study, our brains are wired to pay attention to things that were once rewarding to us. It is then understandable how greedy bankers will keep trying to identify those high risk, high payoff investments despite the risk and dangers.
Government, Central Banks and Regulatory authorities tend to fall prey to the Ego Effect bias. They believe that they are smarter than everyone else, and have a hard time to understand how the general population would not see things the way they do. It is all under their control!
So, we can see how not only have we not learned from our past mistakes, we continue to make them. Looking at the present economic situation, the level of asset prices and the bravado of the current Central Bankers, you can expect another crisis to arise, which will most likely be more severe than the last. Why? Simply because they have shown us that they are not capable of learning from past mistakes.
Does this mean that humans are not capable of learning from their mistakes? No, we certainly are. It just takes effort and a large amount of humility. It may not seem that way at the moment, but in an increasingly complex and uncertain world which we live, people and organizations that embrace failure and create a strong culture around learning from their mistakes will ultimately thrive. Hopefully we’ll learn from our mistakes following the next once-in-a-lifetime crisis!"
- https://www.zerohedge.com/
○
Related:
• "If You Don't See Any Risk, Ask Who Will "Buy the Dip" in a Freefall?"
• "Never Saw It Coming:
Why the Financial Crisis Took Economists By Surprise"
Posted by CoyotePrime at 3:33 AM