"Woke-a-Cola: How To Destroy A World-Leading Brand In 60 Seconds" 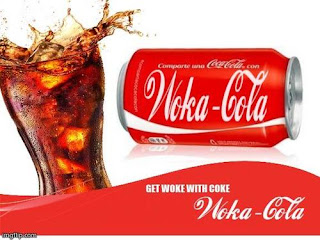 "Woke-a-Cola:
How To Destroy A World-Leading Brand In 60 Seconds"
by Tom Luongo
"I’m sure you’ve heard the phrase, “Get Woke, Go Broke.” In the curious case of Coca-Cola, going woke may be the single biggest branding mistake in the history of marketing. In late February a whistleblower came forth with screenshots, posted on YouTube, of slides from Coke’s internal ‘diversity training’ course urging its employees to quote, “Be less white.” And by ‘less white’ they mean subservient. They don’t mean be more sensitive.
When this happened, I immediately said to myself, “Scratch ever buying another Coke product off my list.” Not a moment’s angst or energy went into it. “Be less white?” “Drink no Coke.” Why? Because choosing not to buy a Coke on the rare occasion I buy a soda anymore is an easy one. Sugar (or aspartame) and water in and of itself isn’t anything to get excited about, it’s the association of Coca-Cola with a past positive experience that is. And they just told me I’m a bad person because of the heritage of my birth. Not a positive, relationship-building experience.
Now I know that Critical Race Theory hustlers think they can immunize themselves and their real agenda with rhetoric, justifying their racism and hoping they’ve conditioned enough of us into feeling guilty to allow the inversion of society where blacks are in power and whites are not. While words certainly have power, nothing has more power than action. This incident sparked an enormous controversy which has yet to die down. But it wasn’t one that made headlines for more than one news cycle. And yet, millions of people made the same effortless decision I did.
Immediately Coke went into damage control and pulled the training course, issued statements that it wasn’t true and all the typical backpedaling a cowardly management team does when caught insulting a core customer base. You would think they would have learned from the NFL. But, no, sadly. In their quest to be all things to all people, if I’m being generous, Coke will quickly find themselves hated by everyone. Hated by whites for telling them they’re bad people. Hated by the race baiters for sucking up to their fragile white overlords.
I’ve spoken to dozens of people who work in modern corporate America and Coke isn’t the outlier, but rather the norm. And the backlash against this race hustling isn’t just coming, it’s here. For some companies, they can survive a mistake like this because their business doesn’t depend on brand loyalty.
Take airlines, for example. When planning a trip is the choice of airline at the top of your priorities? Or are flight availability, timing, proximity to home and about a hundred other things far more important than the particular company operating the plane? Of course not. Air travel is one of the most heavily regulated and, by extension, homogenized industries one can think of. Choosing an airline is like choosing a brand of gasoline. Air travel is a commodity and the most convenient one will most likely determine your shopping preference.
But what is Coca-Cola’s business based on if not its brand? It’s the alchemy of Coke’s secret formula and its marketing which imbues Coke with its profit engine. Famously, Warren Buffett owns a big position in Coke precisely because it had a bullet-proof brand, what he calls, in investing terms, a moat around its business.
And with three little words they just torched more than a century of brand nurturing that has been the standard by which such things are measured. Business schools use Coke’s brand maintenance as a primary case study in how to do it right. Soon, it will be the primary case study on how to do the exact opposite. That is, when we’re allowed to teach such things again.
So, what possessed them to think they could turn on 70+% of Americans already sick to the gills of the anti-white rhetoric coming at them from every angle and not drain that moat?Arrogance? Maybe. Incompetence mixed with mandated virtue signaling is a better bet. Like I said at the outset I didn’t give this much thought when it first happened more than a month ago. But something happened the other day that got my attention.
My private boycott of Coke wasn’t something I thought much of until I went to my local CVS to buy a Diet Pepsi… and found that I couldn’t because there were none in the cooler. 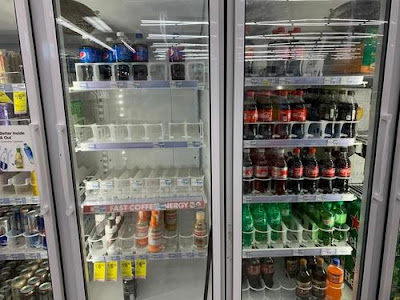 Right next to it was the coke cooler… stocked to the gills. I live in North Florida, practically Georgia, which is literally Coke Country. Remember, Atlanta is Coke’s headquarters. And in my small town there wasn’t a Pepsi to be bought? Needless to say, I chuckled knowing that Donald Trump – 2021’s version of Lord Voldemort – may not be allowed in the public communications space but his words still have tremendous power. He said boycott Coke and my conservative North Florida town said, “Yes, sir.”
Companies like Coke don’t get it. Their management, just like our politicians, live in bubbles too far removed from their customers to have any sense for what they’re feeling. And Trump voters feel marginalized. The free market is a brutal thing. It’s unforgiving and uncompromising. Every seller on Ebay lives in fear of the dreaded negative feedback. So does every Uber driver. Marketing people know that for every hundred positive comments one negative one will depress sales.
It’s why a restaurant that gives you great service a dozen times in a row is forever on your ‘avoid list’ after one bad meal. Don’t get me started about my personal war with Subaru, Netflix and General Motors.
When the barrier to your choice of one product over another is low, there’s no reason to have brand loyalty if that brand doesn’t 1) satisfy your needs or 2) treat your money with respect. Branding is all about identifying with your customer, telling them that buying this product will not just improve your life but make you the kind of person you want others to see you as. And Coke just told seven out of ten Americans they’re scum.
Brand creation takes a lifetime to create and a minute to destroy. Brand destruction of this type is happening all across America right now. I wrote recently about Patreon’s willingness to join the Big Tech censorship brigade but it’s everywhere.
From Disney’s movies to Major League Baseball all the uniquely American things we could find common ground on despite our political differences are under direct attack. Critical Race hustlers are culture warriors obsessed with destroying anything and everything beautiful. They are Leninists never content with what they’ve achieved and will not stop until they have poisoned everything we’ve ever held dear. Amplifying a race war between whites and blacks by turning every institution of culture into a hotbed of fabricated conflict built on false dichotomies has been their modus operandi for generations.
Companies like Coke think they can bargain with these folks, that there is a limit to their behavior. But there isn’t. Coke has committed the critical sin. The race hustlers won this round. If Pepsi is smart they’ll fire their entire Diversity Division tomorrow, and put on a third production shift at the market rate for labor. If they don’t then they too simply want to go broke."
- https://www.zerohedge.com/
Posted by CoyotePrime at 6:12 AM