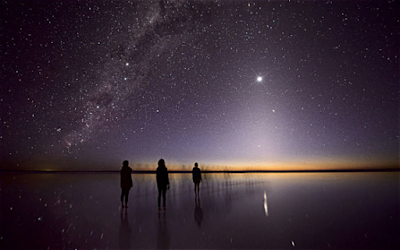 “Mortal Soul: The Great Silence”
by Chet Raymo
“If there is one word that should not be uttered, it is the name of – no, I will not say it. Any name diminishes. In the face of whatever it is that is most mysterious, most holy, we are properly silent. It is appropriate, I think, to praise the creation, to make a joyful noise of thanksgiving for the sensate world. But praising the Creator is another thing altogether. When we make a big racket on His behalf we are more than likely addressing an idol in our own image. What was it that Pico Iyer said? “Silence is the tribute that we pay to holiness; we slip off words when we enter a sacred place, just as we slip off shoes.” The God of the mystics whispers sweet nothings, as lovers do.
In a diary entry for “M.”, near the end of his too-short life, Thomas Merton wrote: “I cannot have enough of the hours of silence when nothing happens. When the clouds go by. When the trees say nothing. When the birds sing. I am completely addicted to the realization that just being there is enough.” The natural world was for Merton the primary revelation. He listened. He felt a presence in his heart, an awareness of the ineffable Mystery that permeates creation. It was this that drew him to the mystical tradition of Christianity, especially to the Celtic tradition of creation spirituality. It was this that attracted him to Zen.
There come now and then, perhaps more frequently in late life than previously, those moments of being (as Virginia Woolf called them) when creation grabs us by the shoulders and gives us such a shake that it rattles our teeth, when love for the world simply knocks us flat. At those moments everything we have learned about the world – the invaluable and reliable knowledge of science- seems a pale intimation of what is. In Virginia Woolf’s novel “The Waves”, the elderly Bernard says: “How tired I am of stories, how tired I am of phrases that come down beautifully with all their feet on the ground! Also, how I distrust neat designs of life that are drawn upon half sheets of notepaper. I begin to long for some little language such as lovers use, broken words, inarticulate words, like the shuffling of feet on the pavement.”
In moments of soul-stirring epiphany, it is reassuring to feel beneath our feet a floor of reliable knowledge, the safe and sure edifice of empirical learning so painstakingly constructed by the likes of Aristarchus, Galileo, Darwin and Schrodinger. But at the same time we are humbled by our ignorance, and more ready than ever to say “I don’t know,” to enter at last the great silence. Erwin Chargaff, who contributed mightily to our understanding of DNA, wrote: “It is the sense of mystery that, in my opinion, drives the true scientist; the same blind force, blindly seeing, deafly hearing, unconsciously remembering, that drives the larva into the butterfly. If the scientist has not experienced, at least a few times in his life, this cold shudder down his spine, this confrontation with an immense invisible face whose breath moves him to tears, he is not a scientist.”
The whole thrust of the mystical tradition, the whole thrust of science, is toward the great silence- an awareness of our ignorance and a willingness to say “I don’t know.” A lifetime of learning brings one at last to the face of mystery. We live in a universe of more than 2 trillion galaxies. Perhaps the number of galaxies is infinite. And the universe is silent. Achingly, terrifyingly silent. Or, rather, the universe speaks a little language such as lovers use, broken words, inarticulate words, like the shuffling of feet on the pavement.”
- http://blog.sciencemusings.com/
Posted by CoyotePrime at 4:54 PM