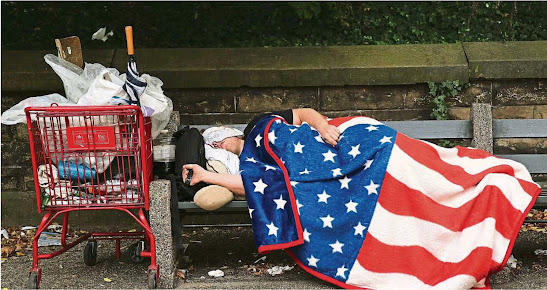 "From American Dream to American Nightmare" (Excerpt)
by Jim Quinn
"For most of the ninety years since James Truslow Adams coined the term American Dream, most Americans still believed the fairy tale of the American Dream, that no matter how humble your beginnings, everyone had a fair chance to become a success in America, based upon your individual talent, intelligence, work ethic and a society that rewarded those who exceled. Sadly, that dream is no longer achievable for most Americans. Our society has devolved into an oligarchy since The Epic of America was published in 1931, where a powerful few rule over a willfully ignorant many through propaganda, mistruth, fear, and an iron fist.
“But there has been also the American dream, that dream of a land in which life should be better and richer and fuller for every man, with opportunity for each according to his ability or achievement. It is a difficult dream for the European upper classes to interpret adequately, and too many of us ourselves have grown weary and mistrustful of it. It is not a dream of motor cars and high wages merely, but a dream of social order in which each man and each woman shall be able to attain to the fullest stature of which they are innately capable, and be recognized by others for what they are, regardless of the fortuitous circumstances of birth or position…
The American dream, that has lured tens of millions of all nations to our shores in the past century has not been a dream of merely material plenty, though that has doubtlessly counted heavily. It has been much more than that. It has been a dream of being able to grow to fullest development as man and woman, unhampered by the barriers which had slowly been erected in the older civilizations, unrepressed by social orders which had developed for the benefit of classes rather than for the simple human being of any and every class.” – James Truslow Adams, "Epic of America", 1931
It is terribly distressing the American dream has vaporized in less than a century after Adams wrote those profound, and at one time true, words. The real questions are why did the American dream turn into an American nightmare and is there a pathway back to the kind of country our forefathers created? There are numerous reasons why the country has fallen far from its original conception as a proud defiant Republic to its current state as a dying empire of depravity, decay, debt, and decadence. The conspiratorial creation of the Federal Reserve and implementation of a Federal income tax in 1913 marked a true destructive turning point for America.
These two choices, implemented by greedy bankers and sleazy politicians, put the country on a road to perdition. They centralized the power of money printing and confiscation of our wages at the point of a gun. The result has been a 96% loss of purchasing power of the dollar and an average tax burden of at least 30%, when all Federal, state, and local taxes are taken into consideration. The standard of living has steadily eroded for the average working class, while extreme wealth has been accumulated by the ruling class. And it was not an accident or miscalculation. It was purposeful. We have been fleeced by bankers, politicians, and the ruling oligarchy for decades.
Our world is now ruled by a tyrannical few who have used the system, created by their class, to accumulate immense wealth and power, sustained by a government they manipulate by buying politicians and having their cronies and thugs write and enforce the laws. The misinformation, propaganda, and fake news dished out by a mainstream media, owned, and controlled by the ruling oligarchy, creates a smokescreen to obscure who wields the true power in this country. The Deep State is no longer a looney conspiracy theory, but the reality of how this country is now controlled and run.
Despite his personality deficiencies, the four-year reign of Trump tore the curtain away and revealed the vile creatures wielding their traitorous power within the swamp of D.C. These despicable vermin (Obama, Clintons, Comey, Clapper, Brennan, Soros, Bloomberg, Gates, Biden) conducted a coup against a duly elected president and ultimately drove him from office by successfully executing a fraudulent election in conjunction with Big Tech despots and Democrat governors in a few swing states. The oligarchs have boldly gone where their criminal counterparts throughout history have gone before. In a just world these wretched traitors would be executed for their crimes against humanity."
Please view this complete and most highly recommended article here:
- https://www.theburningplatform.com/
Posted by CoyotePrime at 7:31 PM