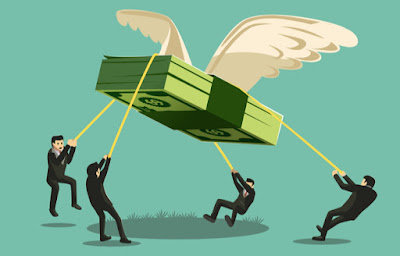 "Inflation Sightings!"
By Bill Bonner
YOUGHAL, IRELAND – "Like pilgrims crossing the Atlantic, we keep our eyes on the horizon, watching for land. Consumer price inflation… it must be out there somewhere. We’ve been headed in that direction for many years. And lately, huge gusts of big spending/big printing… from Donald Trump and Joe Biden… have been driving us forward.
Headed to InflationLand: In 2020, the feds spent $3.7 trillion they didn’t have. In 2021, the Biden Bunch is still adding to the total deficit… U.S. debt topped $28 trillion last week. It’s not as if there were any mystery to what happens next. There’s a huge, sad continent out there – InflationLand. And it requires no navigational skill to get there. Just keep going in this direction… We’ll hit landfall soon enough.
And what’s this? A seagull! We must be getting close. CNBC: "U.S. producer prices increased more than expected in March, resulting in the largest annual gain in 9-1/2 years, fitting in with expectations for higher inflation as the economy reopens amid an improved public health environment and massive government funding. The producer price index [PPI] for final demand jumped 1.0% last month after increasing 0.5% in February, the Labor Department said on Friday. In the 12 months through March, the PPI surged 4.2%. That was the biggest year-on-year rise since September 2011 and followed a 2.8% advance in February."
March’s rate, if it were to continue, would put the PPI well into double digits for the year. Then, the wholesale prices would work their way down the chain to the retail shelves… where people would begin to notice. So far, the numbers are relatively small. But with enough careful management by Treasury Secretary Janet Yellen and President Joe Biden, it shouldn’t be too long before we run onto the rocks.
Full Speed Ahead: You get to InflationLand, grosso modo, by discouraging production and encouraging consumption. Then, when the quantity of money increases faster than the goods and services you buy with them, prices rise. The feds (with the collusion of federal, state, and health officials) “turned off” whole industries last year. Even today, many shops are still closed.
Note that they didn’t shut down demand; they closed off the supply of goods and services. Meanwhile, they gave out money. Here’s The Seattle Times: "The Treasury Department said Wednesday it has issued more than 156 million payments as part of President Joe Biden’s coronavirus relief plan, including 25 million payments that were primarily to Social Security beneficiaries who hadn’t filed 2019 or 2020 tax returns.
The direct payments of as much as $1,400 per person were the cornerstone promise of Biden’s $1.9 trillion package to contain the pandemic and revive the U.S. economy. Roughly $372 billion has been paid out since March 12, a sum that likely boosted hiring last month as Americans had more money to spend."
But with so much stimmy money headed in their direction, a lot of people are apparently deciding not to go to work. Businesses report that it is hard to hire people for entry- and low-level jobs.
No Turning Back: Economists predict a big “surge” in GDP this year. But it is mostly a surge in spending fake money, not in creating new goods and services. In other words, it’s not the gentle wind of an honest, productive economy that we have to look forward to… it’s the gale of out-of-control inflation. MarketWatch:
A sudden surge in demand following a supply shock is a “classic recipe” for a pickup in inflation, wrote Christopher Wood, global head of equity strategy at Jefferies, in an April 4 note. “The result is that investors should be prepared for the biggest inflation scare in America on the reopening of the economy since the early 1980s when former Fed Chairman Paul Volcker crushed double digit inflation in the late 1970s by imposing high real interest rates on the American economy,” Wood said.
But there will be no high real interest rates imposed this time. The monetary system won’t be rescued. InflationLand is where we’re going. There’s no turning back. Stay tuned."
- www.rogueeconomics.com
Posted by CoyotePrime at 12:19 PM