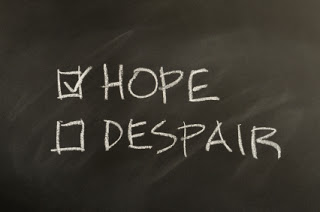 “Why Not Despair?”
"“To view our times as decadent and dangerous, to mistrust the government, to imagine that those in power as not concerned with our best interests is not paranoid but perceptive; to be depressed, angry or confused about such things is not delusional but a sign of consciousness. Yet our culture suggests otherwise. But if all this is true, then why not despair? The simple answer is this: despair is the suicide of imagination. Whatever reality presses upon us, there still remains the possibility of imagining something better, and in this dream remains the frontier of our humanity and its possibilities To despair is to voluntarily close a door that has not yet shut. The task is to bear knowledge without it destroying ourselves, to challenge the wrong without ending up on its casualty list. “You don’t have to change the world,” the writer Colman McCarthy has argued. “Just keep the world from changing you.”
Oddly, those who instinctively understand this best are often those who seem to have the least reason to do so – survivors of abuse, oppression, and isolation who somehow discover not so much how to beat the odds, but how to wriggle around them. They have, without formal instruction, learned two of the most fundamental lessons of psychiatry, philosophy, and religion:
You are not responsible for that into which you were born...
You are responsible for doing something about it.
These individuals move through life like a skilled mariner in a storm rather than as a victim at a sacrifice. Relatively unburdened by pointless and debilitating guilt about the past, uninterested in the endless regurgitation of the unalterable, they free themselves to concentrate upon the present and the future. They face the gale as a sturdy combatant rather than as cowering supplicant.”
- Sam Smith
Posted by CoyotePrime at 12:32 PM