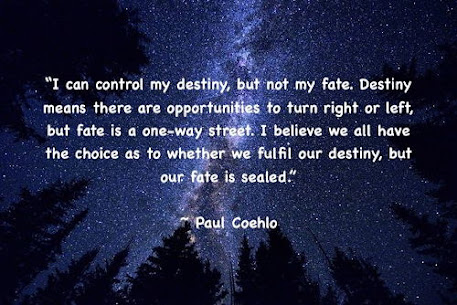 “Destiny”
by David Price
“Are we born with it?”
“A genuine calling further ignites the eternal spark originally
carried into life by the soul and nothing can soothe that inner
flame except that we fully respond and follow it through the world.”
- Michael Meade, “Fate and Destiny”
“A flame must burn somewhere, otherwise no light shines; there is no warmth, nothing. It is terribly awkward, sure enough; it is painful, full of conflict, apparently a mere waste of time – at all events, it is against reason.”
- Carl Jung
“Destiny is played out in the theater of time. In early days, I assumed it was a well marked, straight path with no washed out bridges or bogs of quicksand. Imagine my surprise when I discovered I had somehow gotten waylaid by the wrong fate and had to find my way back to my one true path. I searched in a good baker’s dozen of world renowned cities, including LA, New York, London, Paris and Mexico City. I spent enchanted years in Venice, Florence, Austin and San Miguel, trying to grow that special seed I was sure must exist in me. That attraction to foreign cities should have given me a clue.
In my twenties and thirties I changed partners every few years, so that now I think of certain periods of my life by the names of girlfriends. I always wrote in a journal, but I tried different art forms, theatre, acting, painting and sculpture, even singing, “Voice Therapy” and dance.
I downplayed one thing I had real passion for, language learning, strangely enough. I don’t know why I did that. When I say downplayed, I mean I only learned one foreign language well instead of a good half dozen. Nobody is unimodal – is that a word? – and I still have time, but it seems to me it’s important to respect your natural interests.
It took me fifty years to become a consistently good artist, whereas I learned French well in less than a year. I just have a knack for speaking foreign tongues. I see that now, but for years I didn’t. I didn’t believe it. I believed it was something I was fated to love and long for but that would be forever denied to me. I didn’t realize that loving and longing for something shows talent. You may have to build your own vehicle to get there, but you will someday find yourself living there.
It seems that we often discount our inborn genius for something and only value the things that are hard for us. I hasten to say I never tried car mechanics or physical science. I only tried things I had a basis of resonance with.
But still, you catch my drift, n’est-ce pas? The lesson I draw from this is to listen attentively to your natural impulses. Respect them, they carry your mission in life. They speak from your core being, with intelligence and wisdom. They are your reason for being.”
- https://medium.com/
Posted by CoyotePrime at 11:52 AM