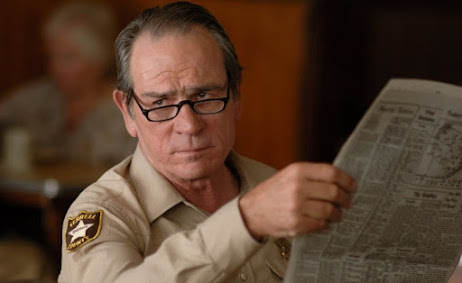 Deputy Wendell: "It's inflation, ain't it Sheriff?"
Sheriff Ed Tom Bell: "Well, if it ain't, it'll do till inflation gets here."
Apologies to "No Country For Old Men"
"Inflation Be Damned!"
By Bill Bonner
"Yes, inflation is here. It is showing up all over the place – in commodities, food, housing, and fuel. I recently received this list from my Bonner-Denning Letter coauthor Dan Denning. It shows the increases over the last 12 months in these commodities:
• Lumber: +265%
• West Texas Intermediate Crude: +210%
• Gasoline: +182%
• Brent Crude: +163%
• Heating oil: +107%
• Corn: +84%
• Copper: +83%
• Soybeans: +72%
• Silver: +65%
• Sugar: +59%
• Cotton: +54%
• Natural gas: +43%
• Platinum +52%
• Palladium: +32%
• Wheat: +19%
• Coffee: +13%
Of course, if you don’t eat, live in a house, or go anywhere, you might not even notice. But the rest of us should prepare."
All Under Control: One of the things we’ve been thinking about is how hard it is to think about inflation. Everywhere you look, there is someone telling you not to bother. Treasury Secretary Janet Yellen has the economy figured out. The Federal Reserve has the financial system under control. The Biden team is busy building a better world for us to enjoy. And if you want to get rich, you just wait for Elon Musk (the business-mogul-turned-Twitter-sensation) to mention something… and you buy it. What a surprise it will be to us all when the whole fantasy collapses in a heap.
No Ordinary Downturn: And yes, that’s what you should expect. Coming soon is no ordinary, cyclical downturn… in which interest rates head up and stock prices head down. In a healthy economy, you might expect that. Things to go up and down. With stock prices at or near an all-time high, a bear market should come along in the normal course of business. Nothing to get alarmed about.
So should the bond market begin a long trend of rising yields. They’ve been going down for the last 40 years… It’s about time they turned around. What we’re looking at now is something much more sinister. Many years ago, we guessed that no pure-paper currency could survive a full interest rate cycle. From bottom to top and back to bottom, a full cycle puts the monetary system… as well as the moral strength of the people who run it… to the test.
As for the latter, we have low hopes. We’ve already seen the authorities pump up the money supply in three panics so far this century. They’ve brought the Fed’s balance sheet to a total of $7.8 trillion. Each time, they were able to drive yields down a little further. But the bull market in bonds seems to have hit bedrock on August 4, 2020, with the yield on the 10-year Treasury bond at 0.51%. Since then, yields have been rising. And now, the 10-year trades around 1.6%.
Moment of Truth: Whether last August was the final bottom for yields, we don’t know yet. But sooner or later, yields will rise further, and things will start to get tough. The U.S. has total debt of more than $80 trillion. Even a small increase in interest rates will make it hard to refinance. Consumer prices will rise, too, with the Consumer Price Index (CPI) headed over 5%… and then over 10%. Not necessarily tomorrow, but it will happen. Meanwhile, stocks will fall. The economy will go into a recession/depression. And then, the moment of truth will be at hand.
In another panic, with all Hell breaking loose around them, the feds will have a choice to make…They can protect the dollar and let the correction continue. Or they can pump more money into the system and let the dollar (and the current paper-money system) die.
Money-Printing Spree: This is the sort of choice that a gold-backed currency (as the dollar was until 1971) was meant to avoid. People found out centuries ago that humans couldn’t be trusted with money. In a moment of stress or greed, they would “print” more of it. But you can’t readily increase the supply of gold. So in a crisis, the authorities would have no choice. They’d have to forgo their hopes of being lauded as a “hero,” and ignore the cries for help. They’d have to admit they have no help to give.
But this time is different. With a few keystrokes, the Fed can create trillions in new money. And in the next crisis – as in the last – they will not hesitate. Even fairly routine setbacks for the stock market (in 2008 and again in 2020) were enough to send the Fed into a money-printing paroxysm. Worldwide, over the last 12 months alone, central banks and central governments provided some $27 trillion in additional liquidity through deficits and money-printing credits.
Inflation Be Damned! So try to imagine what will happen next. The next crash could wipe out the crypto market – for $2 trillion in losses. And merely bringing U.S. stock prices down to historically more “normal” price-to-earnings (P/E) levels would mean a loss of at least $15 trillion.
Imagine how Wall Street would shriek and howl. Imagine how Congress would demand action. Imagine the columnists… the economists… the lobbyists… and the wags, all screaming for more money. Imagine Yellen and Fed chief Jerome Powell, their knees quaking, their backs limp, and their minds mushy… Could they defy the financiers and the federales and stand behind the greenback, like former Fed chair Paul Volcker did? Would they “stop the presses” and let the chips fall where they may?
Not a chance. They would print more money. Inflation be damned! And soon, the graveyard of fake money would open its gates. There, greeting the post-1971 dollar, will be the German mark, the Zimbabwe dollar, the Argentine austral, and hundreds of other failed currencies."
- www.rogueeconomics.com
Posted by CoyotePrime at 7:22 AM