"A Look to the Heavens, With Chet Raymo"

“Reaching For The Stars”
by Chet Raymo
“Here is a spectacular detail of the Eagle Nebula, a gassy star-forming region of the Milky Way Galaxy, about 7,000 light-years away. The Eagle lies in the equatorial constellation Serpens. If you went out tonight and looked at this part of the sky – more or less midway between Arcturus and Antares – you might see nothing at all. The brightest star in Serpens is of the third magnitude, perhaps invisible in an urban environment. No part of the Eagle Nebula is available to unaided human vision. How big is the nebula in the sky? Hold a pinhead at arm’s length and it would just about cover the spire. I like to think about things not mentioned in the APOD descriptions. 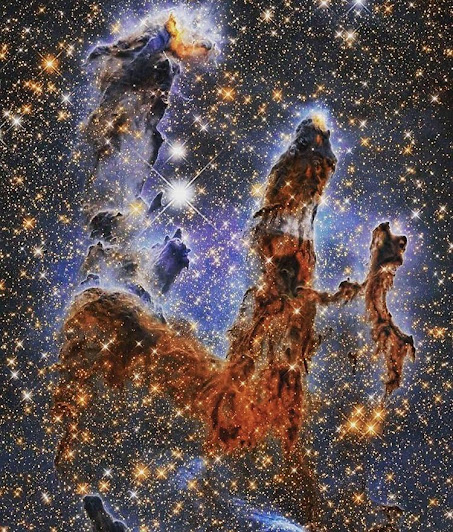 If the Sun were at the bottom of the spire, Alpha centauri, our nearest stellar neighbor, would be about halfway up the column. Sirius, the brightest star in Earth’s sky, would be near the top. Let’s say you sent out a spacecraft from the bottom of the spire that travelled at the speed of the two Voyager craft that are now traversing the outer reaches of the Solar System. It would take more than 200,000 years to reach the top of the spire.
The Hubble Space Telescope cost a lot of money to build, deploy, and operate. It has done a lot of good science. But perhaps the biggest return on the investment is to turn on ordinary folks like you and me to the scale and complexity of the universe. The human brain evolved, biologically and culturally, in a universe conceived on the human scale. We resided at its center. The stars were just up there on the dome of night. The Sun and Moon attended our desires. “All the world’s a stage,” wrote Shakespeare, and he meant it literally; the cosmos was designed by a benevolent creator as a stage for the human drama. All of that has gone by the board. Now we can travel in our imagination for 200,000 years along a spire of glowing, star-birthing gas that is only the tiniest fragment of a nebula that is only the tiniest fragment of a galaxy that is but one of hundreds of billions of galaxies we can potentially see with our telescopes.
Most of us still live psychologically in the universe of Dante and Shakespeare. The biggest intellectual challenge of our times is how to bring our brains up to speed. How to shake our imaginations out of the slumber of centuries. How to learn to live purposefully in a universe that is apparently indifferent to the human drama. How to stretch the human story to match the light-years.”
- http://blog.sciencemusings.com/
Posted by CoyotePrime at 4:46 PM