"Where Your Gaze Lingers..." 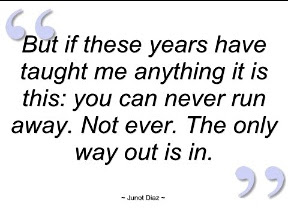 “Sometimes fate is like a small sandstorm that keeps changing directions. You change direction but the sandstorm chases you. You turn again, but the storm adjusts. Over and over you play this out, like some ominous dance with death just before dawn. Why? Because this storm isn’t something that has nothing to do with you, this storm is you. Something inside you. So all you can do is give in to it, step right inside the storm, closing your eyes and plugging up your ears so the sand doesn’t get in, and walk through it, step by step. There’s no sun there, no moon, no direction, no sense of time. Just fine white sand swirling up the sky like pulverized bones.
You have to look! That’s another one of the rules. Closing your eyes isn’t going to change anything. Nothing’s going to disappear just because you can’t see what going on. In fact, things will be even worse the next time you open your eyes. That’s the kind of world we live in. Keep your eyes wide open. Only a coward closes his eyes. Closing your eyes and plugging up your ears won’t make time stand still.”
- Haruki Murakami
“Closing your eyes won’t make the awfulness go away. It may be that nothing will. But dwelling on it, dreading the evil, playing out the misery in your head – doesn’t this feed the monster? You can’t close your eyes to life, but you can choose where your gaze lingers.”
- Richelle E. Goodrich
Posted by CoyotePrime at 2:32 PM