Free Download: Alexander Solzhenitsyn, “One Day in the Life of Ivan Denisovich” 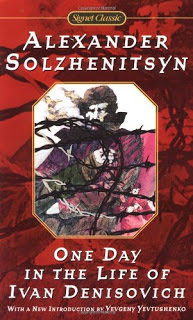 “One Day in the Life of Ivan Denisovich”
by Alexander Solzhenitsyn
“One Day in the Life of Ivan Denisovich” is, as the title suggests, a simple story of one day in the life of Ivan Shukov Denisovich, a prisoner in a Soviet concentration camp. Shukov, a simple Russian peasant fighting for Stalin in WWII, is imprisoned for treason – a crime he did not commit – and has spent the last 8 years in concentration camps. Shukov’s day begins at 5.00 a.m. with the clang of the reveille – he is, along with the other prisoners, marched out into the bitter cold, stripped and searched for forbidden objects, and then sent to work until sundown, without rest, without a full stomach. In this slim 143 page-novella, we follow Shukov’s grueling routine and see how he struggles to maintain his dignity in small, subtle ways. On this day, he has scored some small triumphs for himself – he has swiped an extra bowl of mush at supper, found a piece of metal that can be used as a knife to mend things, replenished his precious tobacco supplies and also has had a share of a small piece of sausage before lights out. Thus, at the end of the day (and the novel), he thinks to himself that it has been “A day without a dark cloud. Almost a happy day.” He must survive only another 3653 days more.”
- http://www.book-review-circle.com/
Freely download “One Day in the Life of Ivan Denisovich”,
by Alexander Solzhenitsyn, here:
- http://www.kkoworld.com/kitablar/
○
"The Chain Of Obedience"
“The death squads and concentration camps of history were never staffed
by rebels and dissidents. They were run by those who followed the rules.”
Posted by CoyotePrime at 2:49 PM