"When Does This Travesty of a Mockery of a Sham Finally Implode?" 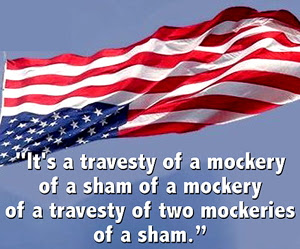 "When Does This Travesty of a
Mockery of a Sham Finally Implode?"
by Charles Hugh Smith
"How many more times do we have to watch Jay Powell claim his speculative bubble isn't a bubble, and that his massive expansion of billionaires' fortunes will magically create jobs for all those living in the real world he's created of stagnation, social depression and inequality? In other words, when will this travesty of a mockery of a sham finally implode? When will the Universe tire of the lies, fraud, embezzlement and corruption and bring the whole rotten charade down? When will we tire of the stale tale of reflation, told by an idiot, full of sound and fury, signifying nothing?
We all know the Status Quo's response to the global financial meltdown of 2008 has been a travesty of a mockery of a sham--smoke and mirrors, phony facades of "recovery", simulacrum "reforms," serial bubble-blowing and politically expedient can-kicking, all based on borrowing and printing trillions of dollars, yen, euros and yuan, quatloos, etc. and funneling them to financiers, corporations, monopolies, cronies and billionaires.
When will the travesty of a mockery of a sham finally come to an end? How many more "saves" does the Ponzi Scheme of central banking possess? Wall Street and its vast army of apologists, lackeys, toadies, schemers, scammers, con-artists and profiteers will have us believe that the Everything Bubble is permanent and its continued expansion will hide all the systemic rot hollowing out America.
On the other hand, maybe manipulation, lies and artifice can no longer keep the Everything Bubble from popping. The chart I prepared back in 2008 (below) give us a flavor of the confluence of crises that are no longer in the future - they're here now.
Cycles are not laws of Nature, of course; they are only records of previous periods of growth/excess/depletion/collapse, not predictions per se. Nonetheless their repetition reflects the systemic dynamic of growth, crisis and collapse, and so the study of cycles is instructive even though we stipulate they are not predictive.
What is predictable is the way systems tend to follow an S-curve of rapid growth with then tops out in excess, stagnates in depletion and then devolves or implodes. We can see all sorts of things topping out and entering depletion/collapse: financialization, the Savior State, Chinese credit expansion, oil production, student loan debt and so on. 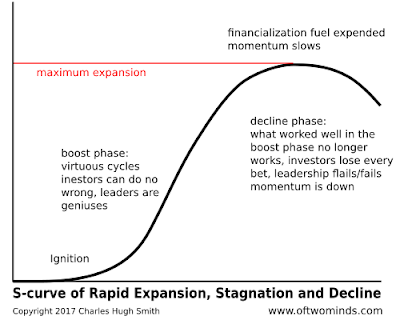 Since each mechanism that burns out or implodes tends to be replaced with some other mechanism, this creates the recurring cycle of expansion/excess/depletion/collapse.
Four long-wave cycles are plotted in the chart: 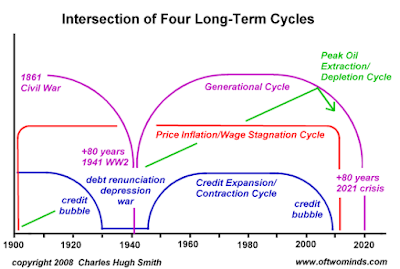 1. The credit expansion/renunciation cycle. a.k.a. the Kondratieff cycle. Credit expands when credit is costly and invested in productive assets. Credit reaches excess when it is cheap and it's malinvested in speculation and stock buybacks, and as collateral vanishes then credit is renunciated/written off. This is inexact, but obviously the organic postwar cycle of expansion has been extended by the central bank money-printing/credit orgy.
2. The generational cycle of four generations/80 years described in the seminal book "The Fourth Turning." American history uncannily tracks an 80-year cycle of crises and profound transformation: 1860 (Civil War), 1940 (world war and global Empire) and next up to bat, 2020, the implosion of the debt-based Savior State and the financialized economy.
3. The 100-year cycle of inflation-deflation described in the masterful book "The Great Wave: Price Revolutions and the Rhythm of History." The price of bread remained almost constant in Britain throughout the 19th century. In contrast, the 20th century has been characterized by inflation - the U.S. dollar has lost approximately 96% of its value since the early 20th century.
Another characteristic of this cycle is wage stagnation: people earn less even as costs of essentials rise, a dynamic that inevitably leads to political crisis and upheaval. The federal agencies have been tasked with masking the decline of the purchasing power of wages with heavily gamed statistics, but here's how to detect wage stagnation in the real world: calculate how many hours the average wage-earner had to work in 1975, 1985, 1995 and 2005 to pay for essentials and common non-essentials.
If you kept records of your expenses, you'd probably find, as I have, that my wages bought far more goods and services in 1975, 1985 and 1995 than they do now, even though the nominal wage was much lower. Ask yourself how it is that jobs that paid $12 in 1985 still pay $12 an hour. How much does that $12 buy now compared to what it could buy in 1985? Precious little.
Jay Powell, you and the rest of your Wall Street lapdogs have failed the American wage earner. You've enriched the top 0.1% and impoverished the bottom 90%. As this RAND Corporation report documents, ("Trends in Income From 1975 to 2018") $50 trillion in earnings has been transferred to the Financial Aristocracy from the bottom 90% of American households over the past 45 years.
4. There's a problem with oil, and it isn't the price or how much is left in the ground. Actually, there's a number of problems with oil: I explain one here: "Oil and Debt: Why Our Financial System Is Unsustainable" (2/25/21). The price isn't the issue, or the supply: it's how much energy wage-earners can buy out of their dwindling discretionary income, i.e. what's left after they pay higher prices for essentials. 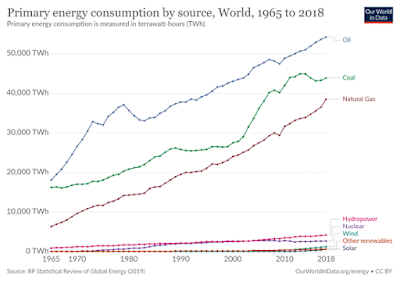 If this is new to you, please read Gail Tverberg's work: "Why Collapse Occurs; Why It May Not Be Far Away." And Tim Watkin's work: "A Failure of Complexity" and "Texas Trip". And Tim Morgan's work on his SEEDS model of how the economy actually works (it's energy that matters, not finance) Mapping the economy, part one and The map unrolled. Or if you prefer video, watch Nate Hagens: "Nate Hagens: The Collision" (1 hour).
The mutually reinforcing crises aren't in the future, they're here now, and Jay Powell's shuck-and-jive has lost its magical powers to cloak the rot with speculative bubbles. The billionaires thank you, Jay, as they've been selling for months, leaving all the fools you conned holding the bag when your con-artist powers fade and your bubble pops." 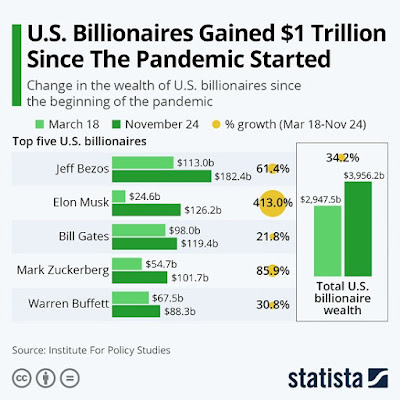