"The Delightful Poetry of Inflation" 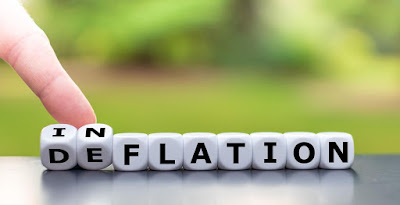 "The Delightful Poetry of Inflation"
by Bill Bonner
And now I’m lost, too late to pray,
Lord I take a cost, oh the lost highway..."
– "Lost Highway" by Hank Williams
YOUGHAL, IRELAND – "The subject this week is inflation. And what a marvelous subject it is. One day, a share in Tesla costs $50. Flash forward to today, and it has risen to $653. Or take bitcoin… Five years ago, you could buy it for $500. Now, it’s nearly $50,000. Or a daily newspaper. In 1918, you could buy a daily newspaper in Berlin for less than 1 deutsche mark. Five years later, you’d have needed 42 billion of them. We’re a long way from 100,000% consumer price inflation. But even the longest journey, down that lost highway, begins by stepping on the gas.
Hit the Gas: And look at this: We’re rollin’ now… Oil is now at $60 a barrel, up from near zero in April 2020. The U.S. gasoline index increased 7.4% in January. The United Nations says food prices are at a six-year high. And consumable goods are getting smaller, as manufacturers squeeze output to avoid raising prices. Nutella reduced its 400-gram jar of chocolate spread to 350 grams. A package of Nathan’s Pretzel Dogs was cut from five to four. And Charmin’s Mega Roll toilet paper was reduced by 200 sheets.
And here’s one of the heroes of "The Big Short", warning us to prepare for higher prices. From Business Insider: “Prepare for #inflation,” the investor [Michael Burry] said in a now-deleted tweet. “Re-opening & stimulus on the way. Pre-COVID it took $3 debt to create $1 GDP, and it is worse now. In an inflationary crisis, governments will move to squash competitors in the currency arena. $BTC #gold.”
[…]
The investor compared Germany’s path to hyperinflation in the 1920s to America’s current trajectory. “Germany [the US] started by not paying adequately for its war [on COVID and the GFC fallout] out of the sacrifices of its people – taxes – but covered its deficits with war loans [Treasuries] and issues of new paper Reichsmarks [dollars]. #doomedtorepeat,” Burry tweeted."
Speculative Frenzy: In the early stages, inflation seems benign… even agreeable. An investor, with no particular effort or insight on his part, suddenly becomes rich. What is going on? Is it a real miracle? Or just tomfoolery? You can make people rich in material treasure by adding no treasure at all… You can make one master of the other – for now, he can pay the other to do his bidding with nothing more than, well, nothing at all… pieces of paper… or mere electronic notations, so light, so fleeting, you can’t see them… touch them… or even ask them to dinner.
And yet, these notations change everything. One man retires in comfort. Most are impoverished. And the economy, once so fulsome with progress and industry, turns to rank speculation… gambling…every man hoping that he will be the one with the winning hand… the first in line to get the new money.
It’s a “speculative frenzy,” says Berkshire Hathaway’s Charlie Munger, who was born at the peak of Germany’s hyperinflation. “Wretched excess,” is how he describes trading in the likes of Tesla and bitcoin. Adds his business partner, Warren Buffett, born during the Great Depression, “Fixed-income investors [who suffer when the dollar is inflated] face a bleak future.”
Replay: There are few advantages to getting old. But one of them, if you can keep your wits about you, is that you’ve seen a lot of wretched excesses; you know what they look like. The whole phenomenon of inflation is deeply entertaining and wonderfully instructive. But it doesn’t come along every day… So we must savor it… like an antique whiskey. Rolling it over his tongue, the old man says to himself (no one else will listen), “Oh yeah… I’ve tasted this before.”
But today’s crazes… the SPACs… cryptos… space stocks – perhaps they are different? Who knows? Youthful optimism tells us that this is a New Era. Old age and grumpiness tell us that it’s a replay of the Old Era, starring that long-time favorite – inflation. The trouble with inflation is that the useful learning comes not at the beginning, but at the end.
For, by then, the nation’s fields and factories have fallen fallow… the economy is in desuetude… and fortunes have declined, too, if not disappeared altogether. By then, the common man would kick his own derrière if he could reach it. How could he have failed to appreciate the delightful poetry of inflation… and how it made something out of nothing and then nothing out of something…leaving almost everyone – save those few who really understood what was happening – destitute?
Too Late: Yes, that is the problem. It is a story whose moral only becomes clear at the end… like a Marcel Pagnol novel… where (spoiler alert!) the mean old man finally learns that the young man… a humpback he has helped to kill… was actually his own son. By then, it is too late to make amends. Too late to say “I’m sorry.” Too late to change course. Too late to avoid the awful catastrophe.
Yes, that is the problem with inflation. Like life itself, it waits too long to speak. It’s only when you approach the end that you hear it whisper: “You damned fool… How could you believe that printing-press money would make you rich?” And then, in your moment of reckoning… racked by doubt and pain… a light turns on and you finally see the scene… your whole life laid out before you – your mistakes… your sins… your lost opportunities and wrong turns… And you finally see what it all meant…and nobody cares. It’s too late.
Tomorrow… why inflation is probably coming, no matter what the Federal Reserve does."
- www.rogueeconomics.com
○
Related:
"The Global Inflation Nightmare That You
Have Been Warned About Is Here"
Posted by CoyotePrime at 11:43 AM