"How the Brain Stops Time" 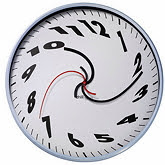 "How the Brain Stops Time"
by Jeff Wise
"One of the strangest side-effects of intense fear is time dilation, the apparent slowing-down of time. It's a common trope in movies and TV shows, like the memorable scene from "The Matrix" in which time slows down so dramatically that bullets fired at the hero seem to move at a walking pace. In real life, our perceptions aren't keyed up quite that dramatically, but survivors of life-and-death situations often report that things seem to take longer to happen, objects fall more slowly, and they're capable of complex thoughts in what would normally be the blink of an eye.
Now a research team from Israel reports that not only does time slow down, but that it slows down more for some than for others. Anxious people, they found, experience greater time dilation in response to the same threat stimuli. An intriguing result, and one that raises a more fundamental question: how, exactly, does the brain carry out this remarkable feat?
Researcher David Eagleman has tackled his very issue in a very clever way. He reasoned that when time seems to slow down in real life, our senses and cognition must somehow speed up-either that, or time dilation is merely an illusion. This is the riddle he set out to solve. "Does the experience of slow motion really happen," Eagleman says, "or does it only seem to have happened in retrospect?" To find out, he first needed a way to generate fear of sufficient intensity in his experimental subjects. Instead of skydiving, he found a thrill ride near the university campus called Suspended Catch Air Device, an open-air tower from which participants are dropped, upside down, into a net 150 feet below. There are no harnesses, no safety lines. Subject plummet in free fall for three seconds, then hit the net at 70 miles per hour.
Was it scary enough to generate a sense of time dilation? To see, Eagleman asked subjects who'd already taken the plunge to estimate how long it took them to fall, using a stopwatch to tick off what they felt to be an equivalent amount of time. Then he asked them to watch someone else fall and then estimate the elapsed time for their plunge in the same way. On average, participants felt that their own experience had taken 36 percent longer. Time dilation was in effect.
Next, Eagleman outfitted his test subjects with a special device that he and his students had constructed. They called it the perceptual chronometer. It's a simple numeric display that straps to a user's wrist, with a knob on the side let the researchers adjust the rate at which the numbers flash. The idea was to dial up the speed of the flashing until it was just a bit too quick for the subject to read while looking at it in a non-stressed mental state. Eagleman reasoned that, if fear really does speed up our rate of perception, then once his subjects were in the terror of freefall, they should be able to make out the numbers on the display. As it turned out, they couldn't. That means that fear does not actually speed up our rate of perception or mental processing. Instead, it allows us to remember what we do experience in greater detail. Since our perception of time is based on the number of things we remember, fearful experiences thus seem to unfold more slowly.
Eagleman's findings are important not just for understanding the experience of fear, but for the very nature of consciousness. After all, the test subjects who fell from the SCAD tower certainly believed, as they accelerated through freefall, that they knew what the experience was like at that very moment. They thought that it seemed to be moving slowly. Yet Eaglemen's findings suggest that that sensation could only have been superimposed after the fact. The implication is that we don't really have a direct experience of what we're feeling ‘right now,' but only a memory - an unreliable memory - of what we thought it felt like some seconds or milliseconds ago. The vivid present tense we all think we inhabit might itself be a retroactive illusion."
- https://www.psychologytoday.com/
○
For more on how intense fear affects memory, see my post,
"The Moment That Lasts Forever"
Posted by CoyotePrime at 3:57 PM