“The Pelican Nebula is changing. The entire nebula, officially designated IC 5070, is divided from the larger North America Nebula by a molecular cloud filled with dark dust. The Pelican, however, is particularly interesting because it is an unusually active mix of star formation and evolving gas clouds. 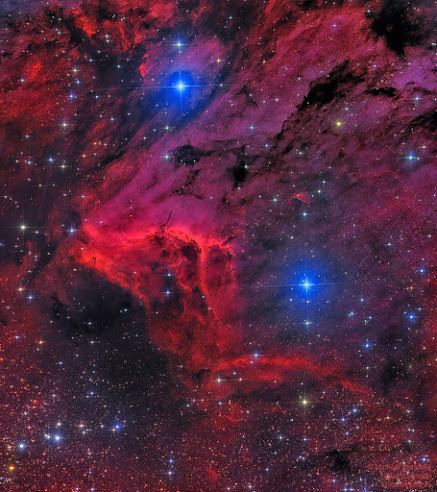 The featured picture was processed to bring out two main colors, red and blue, with the red dominated by light emitted by interstellar hydrogen. Ultraviolet light emitted by young energetic stars is slowly transforming cold gas in the nebula to hot gas, with the advancing boundary between the two, known as an ionization front, visible in bright red across the image center. Particularly dense tentacles of cold gas remain. Millions of years from now this nebula might no longer be known as the Pelican, as the balance and placement of stars and gas will surely leave something that appears completely different.”
- https://apod.nasa.gov/apod/astropix.html
○
"In a universe devoid of life, any life at all would be immensely meaningful. We ARE that meaning. "And what we see, "says the poet Mary Oliver, "is the world that cannot cherish us, but which we cherish." As though life itself is the great, universal, unrequited love of all time. But there is even more to this. Deep mystery. We are the universe aware of itself. We let the miracle get lost in distractions. On a planet so rich with living companions, much of humanity sentences itself to solitary confinement. Late at night, I used to lie in my boat listening to radio calls from ships to families ashore. There was only one conversation, and it boils down to, "I love you and I miss you: come home safe." Connections make us individuals. Ironic, isn't it? The more connected, the more unique our life becomes."
- Carl Safina
Posted by CoyotePrime at 4:51 PM