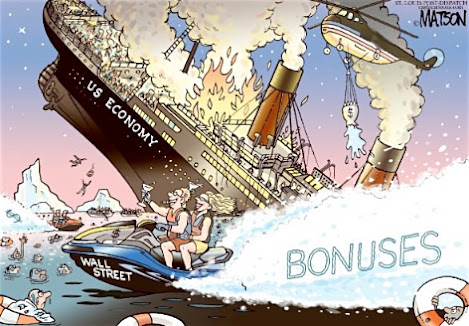 "Then you will see the rise of the men of the double standard - the men who live by force, yet count on those who live by trade to create the value of their looted money - the men who are the hitchhikers of virtue. In a moral society, these are the criminals, and the statutes are written to protect you against them. But when a society establishes criminals-by-right and looters-by-law - men who use force to seize the wealth of disarmed victims - then money becomes its creators' avenger. Such looters believe it safe to rob defenseless men, once they've passed a law to disarm them. But their loot becomes the magnet for other looters, who get it from them as they got it. Then the race goes, not to the ablest at production, but to those most ruthless at brutality. When force is the standard, the murderer wins over the pickpocket. And then that society vanishes, in a spread of ruins and slaughter.
Do you wish to know whether that day is coming? Watch money. Money is the barometer of a society's virtue. When you see that trading is done, not by consent, but by compulsion - when you see that in order to produce, you need to obtain permission from men who produce nothing - when you see that money is flowing to those who deal, not in goods, but in favors - when you see that men get richer by graft and by pull than by work, and your laws don't protect you against them, but protect them against you - when you see corruption being rewarded and honesty becoming a self-sacrifice - you may know that your society is doomed."
Ayn Rand, “Atlas Shrugged”
Posted by CoyotePrime at 3:23 PM