"It's Official: The World's Biggest Silver Short Squeeze Has Begun!"

"It's Official:
The World's Biggest Silver Short Squeeze Has Begun!"
by Epic Economist
"It's official: the world's biggest short squeeze has begun. As we previously reported, WallStreetBets members have been discussing on a Reddit forum and other places on social media about descending to the precious metal market. Yesterday, Silver stock prices hit an eight-year high as the online trading war against big banks and hedge funds found a new battleground. The conflict between short-sellers and the Reddit group has already seen GameStop’s share price skyrocket by 1,700% in the space of a month. But now, the small investor Reddit group’s trader frenzy is shifting its focus in order to team up and start to pump their money in silver shares to create a shortage of physical silver in the markets and send prices to unprecedented levels. The Reddit Rebellion against large institutional investors is attempting to destroy big banks they believe are artificially suppressing prices and manipulating the markets. And that's what we discuss in this video.
Following a coordinated campaign to buy both silver exchange trading funds in the paper realm and precious metals in the physical, the Reddit-Raiders are putting their plan of triggering the world's biggest short squeeze into place, as online bullion dealers have seen such a huge demand for silver over the weekend that U.S. precious metals retailers were left with little to no physical inventory, while silver prices exploded higher following in the same footsteps of other "most-shorted" names. According to the last trading numbers, the precious metal is currently trading at around $30/ounce, an 11.5% surge which has been the biggest one-day increase since September 16, 2008 - the day Lehman filed for bankruptcy. If the price closes there, it is going to be the highest price since early 2013.
However, as Bloomberg accurately assesses, silver stocks are very different from stocks like GameStop. Starting with the fact that the extent of a short squeeze in silver is much more complex: data from the Commodity Futures Trading Commission indicate that money managers have had a net-long position, futures, and options on the metal since mid-2019. More significantly, the market for silver is also much larger than those for smaller stocks like GameStop. While the bricks-and-mortar video game retailer had a market capitalization of about $1.4 billion in mid-January - before the Reddit movement prompt the company’s value to increase over 16-fold - according to LBMA data, London vaults hold 1.08 billion ounces of silver, whose worth is evaluated at approximately $32 billion at current prices.
For the foreseeable future, it's very unlikely that a reversal of the surge occurs: short-term forward rates on the London silver market flatlined on Monday, which suggests that a strong demand for the metal will be seen over the coming weeks. Whether the price jump fuelled by the unprecedented demand is solely being sparked by the Reddit Rebellion or hedge funds might also be behind it, the truth is that silver shortages are already happening pretty much everywhere, and sellers of physical silver including Apmex - considered the "Walmart" of precious metals products in North America - have affirmed to be unable to process orders until Asian markets opened due to the record demand. Many of them have been taking extraordinary measures for the first time in their history by temporarily suspending silver sales while defending that it could take longer than usual to fill orders going forward.
GoldSilver.com's President, Alex Daley, stressed that this rush on physical silver came at a time when the industry was already registering low supply. This shortage of physical silver is revealing a tear in the precious metals market unlike anything we have ever witnessed before. And although silver futures prices - which stand for paper silver - have remained stable during the day, physical silver prices remain at sky-highs. In other words, the elites can print all the paper silver it wants, but as there is no physical supply, this will likely end really badly for those trying to suppress the fact that this is indeed the most speculative market of all. Or as QTR Research has perfectly put into words: "no matter what happens with the Silver Squeeze, a lot of younger people are for the first time informing themselves that metals are the only true real money. That realization sticks for life, even when the squeezes end. This is a red pill moment for many, and it's beautiful."
- https://www.epiceconomist.com​
○
"Insider Intel: "I work for a bank whose name I won’t disclose.
You fools. You have no idea what you’re doing." 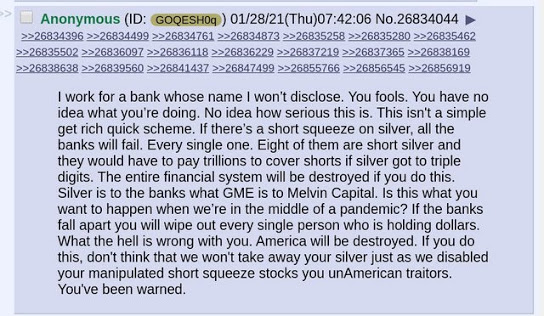