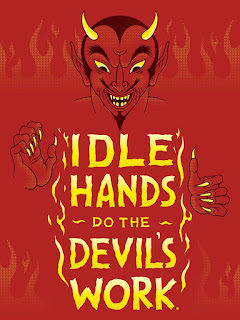 "The Devil’s Work"
by The Zman
"There is an old expression that has fallen out of favor in the post-scarcity age, but it may be the key to understanding the current crisis. That expression is, “Idle hands do the Devil’s work.” When people do not have anything productive and useful to do with their time, they are more likely to get involved in trouble and criminality. A variant of this is “The Devil makes work for idle hands.” The idea there is if you want to avoid Old Scratch, then make sure you keep yourself useful to God.
The source of these proverbs is unknown, but variations of them go back to the early middle ages, so it is probable they evolved with Christianity. It is not unreasonable to think the idea is universal to civilization. After all, every human society has had to deal with the idle, lazy, and troublesome. Making sure these people are kept too busy to cause trouble is one of those primary challenges of civilization. Every ruler has known that too many idle young men is bad for his rule.
Even in the smaller context, this is something we instinctively know. In the workplace, people with too much free time get into trouble. If the IT staff has too much free time, they start tinkering around with the stuff that is working and before long that stuff stops working and the system goes down. A big part of what goes on inside the schools is to keep the kids and the teachers busy. Home schoolers have known for years that the learning content is just a few hours a day. The rest is busy work.
The point here is that people of all ages need a purpose, something that occupies their mind and their time. If something useful and productive is not filling that need, then something useless or unproductive will fill the void. For most people this may be a hobby or leisure activity. For others, it often means a useless activity is turned into something important. Elevating the mundane to the level of the critical and then creating drama around the performance of the mundane activity.
This is what we see in our political class. The ruling class of every society has a ceremonial role, a procedural role, and a practical role. Outside of a crisis like a war or natural disaster, the political class is performing its duties in the same way a line worker in a factory preforms his role. In popular government this means the pol shows up at public events. He performs the tasks his office requires like signing papers and casting votes. He helps grease the wheels when they need grease.
Into the 20th century, most of our political offices were part-time jobs. State legislatures met for a short period during the year. Otherwise, the legislators were back home doing their jobs. Executive positions like governor and president were fulltime jobs, as they were in charge of the civil service and in the case of president, commander-in-chief of the military. Within living memory, Washington DC would empty out in the spring and remain empty until the fall when Congress returned.
What we see today is politics at all levels has become a full-time job, but one with less to do when it was considered a part-time job. Congress, for example, is something close to a 24-hour drama now. The politicians and their retinues are now doing politics as a full-time obsession. Yet almost all of what they do is unnecessary. In fact, much of what they do is harmful. Very few things passed by Congress enjoy the support of the majority of the people or even a large plurality.
It is not just that these part-time jobs have been made into full-time obsessions. It is that much of what we used to need from government is now filled by individuals, ad hoc networks, and the private sector. Much of what government does is actually done by private contractors on government contracts. One of the ironies of the post-Cold War world is that the federal workforce has declined relative to the population, while the number of people employed in politics has gone up.
Then there is the fact that much of what government does could be automated or simply eliminated entirely. The services that are required like renewing licenses and paying fees can all be automated. In many cases they have been, but that did not result in fewer people, as we see in the dreaded private sector. Instead, it resulted in more idle hands looking for a purpose. On the political side, much of what Congress does could also be eliminated or automated.
What has happened in the last 30 years is we have grown the idle class at the top of our society and while decreasing their necessity. Much of what goes on in our politics is make work designed to get public attention. Think about it. If the cable news channels were shuttered and the social media platforms run by the oligarchs were closed, what would change in America? Nothing of practical importance. Our world would get quieter and there would be a boom in forgotten hobbies.
American political culture evolved during the Cold War to fight communism and prevent a nuclear war. Those were important tasks that occupied the minds and hands of the political class. Once those things went away, those idle hands searched about for a new crisis. Health care, Gaia worship, Islam and now invisible Nazis have been used to keep the idle hands of the political class busy. In the process, the political class has been driven mad and is threatening the rest of society."
- https://www.theburningplatform.com/
Posted by CoyotePrime at 3:40 PM