“A Short Course in Get-a-Life Science” 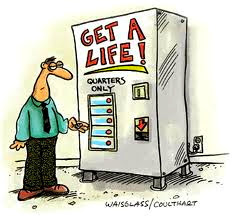 “A Short Course in Get-a-Life Science”
by Lore Sjöberg
“There are about 250 million U.S. internet users, according to something I read on the internet, and about a quarter of them use discussion boards, according to something I read on some discussion board. And yet, I’m not seeing much evidence that the corpus of comments clogging the commons is going to produce the next Bertrand Russell, or for that matter the next Nipsey Russell.
There seems to be a certain desperation in the tone of your typical bile-posting poster child. They obsessively stomp from site to site, from article to article, fuming and chafing to share their opinion with the world. Oddly enough, often as not that opinion is “get a life.” I’m not exactly sure what “a life” is in this context, but it’s apparently impossible to capture on video, because I’ve never seen a YouTube comment saying, “Ah, this person truly has a life! Good show!” I was, however, able to isolate the Three Laws of Getting a Life:
1. Life is inversely proportional to time: People who need to get a life invariably, according to online comments, have too much time on their hands.
2. The best way to tell that someone lacks a life is that they are doing something just because they want to. This strikes me as a bit like defining “starvation” as “a bellyfull of homemade ice cream with chocolate sauce,” but you can’t argue with science.
3. Life-deficit is communicable. If you tell someone to get a life, that will often inspire a third party to impress upon you the importance of a life, and your current lack of same.
This led me to wonder: Who has less of a life, the person who needs to get a life, or the person who says “get a life” to the person who needs to get a life?
According to the Second Law, the more self-indulgent and less practical an activity, the less of a life the participant has. While skydiving in a Bulbasaur costume is clearly both fun and pointless, it does require some sacrifice (hours spent sewing, plane rental fees) and it has some benefits (free drinks, casual sex with Pokégroupies). By comparison, telling someone to “get a life” is as easy as it is useless. But then, telling someone who just told someone “get a life” to get a life is clearly even more pointless. That implies that life-deficity can increase infinitely. Shouldn’t there be a lower limit where one has no life at all? (Or, to be more exact, where one has only zero-point life due to quantum fluctuation?)
That’s when it struck me, an insight worthy of a Hendrik Lorentz or a Florence Henderson: Needing to get a life isn’t the result of lacking life; life is the result of lacking the need to get a life! The scales were lifted from my eyes and set back in the eye-scale cabinet. Of course! If you spend every waking minute of your limited lifespan doing something drearily important, then you don’t have an abundance of life, you have zero “get-a-life.”
On the other hand, as I’ve learned from either chaos theory or Elliott Smith lyrics, meaninglessness is infinite. There’s always a way to make your actions more pointless and less purposeful. This is easily proven: If you post “Get a life!” you need to get a life less than someone who posts “Get a life!!” Thus, adding an exclamation point makes any activity more, well, pointless. Because there’s an infinite supply of exclamation points (at least according to classical typographic theory), there is no limit to the amount of get-a-life one can reach.
The Universal Get-a-Life Formula: I’ll be publishing the details of my work in an upcoming issue of “The Journal of Cretinology and Loser Science,” but suffice to say I have worked out the Universal Get-a-Life Formula. Here it is:
g’ = (g + 1)cue
…where g is the amount of get-a-life of the individual being commented on, c is the number of words in the comment that suggests that that individual get a life, u is the number of all-uppercase words in the comment, e is the number of exclamation points in the comment and g’ is the resulting amount of get-a-life exhibited by the commenter.
I have arbitrarily decided on Tron Guy as the international standard for one unit of get-a-life. Thus, by definition, Tron Guy has a get-a-life factor of 1 TrG. Most people who spend less than an hour a day using the internet have a get-a-life factor of 0.2 to 0.4 TrG. Charlie Sheen, by comparison, tops out at 6.351 TrG.
Now say someone using the handle “halokillr” visits a video of Tron Guy — or a photo of Tron Guy, or an article about Tron Guy — and leaves the following comment: “GET A LIFE!!!!! ha ha SO DUMB and y r u DOING?!?!!!” According to my calculations, halokillr now boasts a get-a-life factor of 212 times 69, or just over 41 billion.
I await my Nobel Prize.”
- https://www.wired.com/
Posted by CoyotePrime at 12:38 PM