"The Fire This Time" 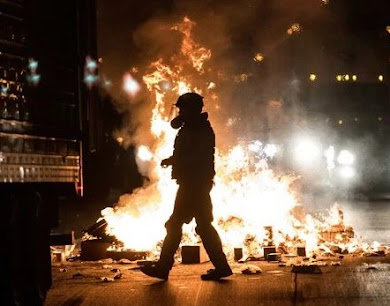 "The Fire This Time"
by Jim Kunstler
"Can’t we just all get along? No, apparently. Branding everyone to the right of Woke a “terrorist” and an “insurrectionist,” as is the style these days with the sore winner party, will probably not warm a whole lot of hearts and minds among the politically disenchanted. It comes with an odor of desperation, too, as if Joe Biden’s consolidated Deep State is so lacking in confidence, even in victory, that it can’t distinguish policy from punishment - and so the beatings will continue until morale improves.
Outside the razor-wired DC perimeter, with its bomb-proof bureaucracy, the economy is in freefall. This has not quite come to the attention of a new regime aroused over systemic racism and the pressing need to expand athletic opportunity for transsexuals. But an inferno is racing across the land like a prairie fire and the remaining American buffalo out there may be inclined to stampede before long. Can Ol’ White Joe hear their distant hoofbeats from the Oval office? Maybe not with Nancy Pelosi and AOC screaming in his ears.
The Bureau of Labor Statistics reported 779,000 people filed for first-time unemployment the week ended January 30. The news media called that “a beat” because it was under the 830,000 expected. It’s been that way week-after-week this year of Covid-19. Nonfarm business sector labor productivity decreased 4.8 percent in the fourth quarter of 2020, the largest quarterly decline in the measure since the second quarter of 1981. Yes, forty years ago, when the US population was 226 million (it’s now 330 million). The stock market responded by smashing new all-time- highs. Bad “optics?”
How do you think the value of shares manages to go up, up, up, and away, day-after-day, while the value of the economic activity goes down, down, down day-after-day? Must be Modern Monetary Magic, like the Federal Reserve purchasing $80-billion a month in US Treasury bond issues and another $40-billion in mortgage-backed securities for a grand total of $140-billion a month. The real monetary magic, of course, is that it’s possible to have a Wall Street boom while the economy collapses. The nation’s assets have already been stripped, so where is all this “value” actually coming from? Answer: from the false expectation of enormous future American productivity. It’s false because it’s based on the creation of debt that can’t possibly be paid back…ever. It’s not based on investment in future productive enterprise.
The economy won’t be fixed by policy because the things that have to happen to fix it will be resisted to the death by the parasitical entities feeding on what little remains. For instance, Walmart. Do you think it’s unhealthy that all the profit in American commerce is funneled into Bentonville, Arkansas? It used to be distributed in hundreds of thousands of small businesses in tens of thousands of US towns and cities. What do you think will die first: Walmart or the organism its feeding on?
Since the dynamic at work is emergent and non-linear, other forces can come between these relationships and change things. We are already in conflict with China, the land that supplies most of the merchandise in Walmart. The conflict right now is mostly playing out in the capture of US corporate and cultural enterprise, and in cyberwarfare, and it’s liable to hotten up around the continued sovereignty of Taiwan (America’s China). It’s difficult to assign intentions to another country but it appears that China’s China wishes to cancel the USA as the fading hegemon on the world stage, at least neutralize us, and perhaps dominate us. Mr. Trump is no longer in place to resist that, and the country might be forced to consider all those deals that our new president, “China Joe” enjoyed from the Biden family’s business ventures there over the years.
Emergently, then, the Big Box business model could fail, and in fairly short order, which would at least give Americans a chance to self-reorganize the production and distribution of goods in our own country. It sure won’t be like 1957 again, but it would give an awful lot of idle people more to do when they get up in the morning. Wait for it, and plan accordingly.
In the meantime, we are treated to the sordid spectacle of Democratic Wokesters endeavoring to destroy what remains of American cultural life. It’s an incomparably stupid and malign distraction from the imperatives of this historical moment. They will not succeed in cancelling those who object to the systematic disassembly of our national language, myth, and meaning, even if we have to go back to the mimeograph machine to keep these things alive. They will not turn a republic into a psychopathic despotism. Politics, they say, is downstream from culture. Truth is the antidote to a culture of lies. The upcoming impeachment trial of former president Trump will be a showcase for that, and it may prove to be a hoax too far."
- https://kunstler.com/
Posted by CoyotePrime at 8:20 AM