"Mencken, Where Are You Now That We Need You?" 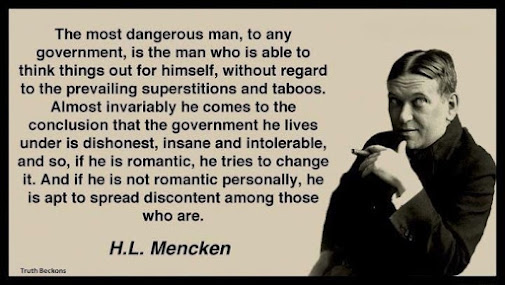 "Mencken, Where Are You Now That We Need You?"
"Henry Louis Mencken, The “Sage of Baltimore”, (September 12, 1880 – January 29, 1956) was an American journalist, essayist, satirist, cultural critic, and scholar of American English. He commented widely on the social scene, literature, music, prominent politicians, and contemporary movements. His satirical reporting on the Scopes Trial, which he dubbed the "Monkey Trial," also gained him attention."
- https://en.wikipedia.org/wiki/H._L._Mencken
○ 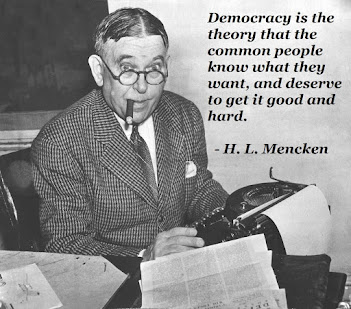 'The men the American people admire most extravagantly are the most daring liars; the men they detest most violently are those who try to tell them the truth.'
"The demagogue is one who preaches doctrines he knows to be untrue to men he knows to be idiots."
"When a candidate for public office faces the voters he does not face men of sense; he faces a mob of men whose chief distinguishing mark is the fact that they are quite incapable of weighing ideas, or even of comprehending any save the most elemental - men whose whole thinking is done in terms of emotion, and whose dominant emotion is dread of what they cannot understand. So confronted, the candidate must either bark with the pack or be lost... All the odds are on the man who is, intrinsically, the most devious and mediocre."
"When somebody says it’s not about the money, it’s about the money."
"A professional politician is a professionally dishonorable man. In order to get anywhere near high office he has to make so many compromises and submit to so many humiliations that he becomes indistinguishable from a streetwalker."
"The average man never really thinks from end to end of his life. The mental activity of such people is only a mouthing of cliches. What they mistake for thought is simply a repetition of what they have heard. My guess is that well over 80 percent of the human race goes through life without having a single original thought."
"I have little belief in human progress. The human race is incurably idiotic. It will never be happy."
- H. L. Mencken
Posted by CoyotePrime at 8:32 AM