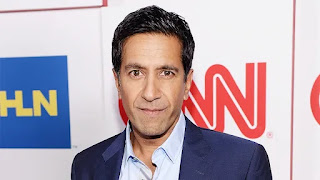 "Poster Boy"
by Jim Kunstler
"Maybe Dr. Sanjay Gupta was born at night - but surely not last night. Apparently, CNN’s house doctor went into his interview on the Joe Rogan Experience with eyes wide shut. Did his handlers and preppers not have a clue that Joe would give Sanjay the business about CNN’s deliberate, incessant, and epic lying in the service of forces that seek to destroy the country, its people, and western civ with them?
The issue was Mr. Rogan declaring publicly that he took ivermectin with a suite of other drugs to get over Covid-19 in a few days’ time and then CNN’s defaming of the Nobel Prize winning drug as “horse de-wormer,” and defaming Joe Rogan for taking it. CNN’s bad faith propaganda plays a key role in the dishonest and untrustworthy campaign by America’s public health officialdom, led by Dr. Anthony Fauci, to prevent the clinically-proven ivermectin early treatment protocol from being recognized by the FDA, because doing so would nullify the FDA’s emergency use authorization for the still-unapproved Covid-19 “vaccines.”
It was painful to watch Sanjay wriggle and try to squirm away from the accusation that his network lies knowingly to the public (and that he abets it). “It’s a lie that they’re conscious of, it’s not a mistake,” Joe Rogan said, pithing the famous TV doc like a common carpet moth. “You know that they know they’re lying,” he pressed on. “Do you think that’s a problem, that your news network lies?”
Yeah, it’s a problem, Sanjay finally admitted, lamely. And it’s no small problem that the nation’s community of doctors has allowed itself to be buffaloed into killing tens-of-thousands of patients across the land who are denied life-saving treatments, while harming and killing many others with “vaccines” which deliver toxic spike proteins that damage blood vessels and organs.
Sanjay Gupta is now the discredited poster boy for American doctors-without-honor and a medical system in abject collapse. All this lying by the government, the doctors, and the news media led to “Joe Biden’s” dastardly “vaccine mandate” - and fake, too, since there is still no actual legal instrument behind it - that is the final insult to medicine as legions of health-care workers ranging from doctors and nurses to janitors quit their jobs rather than submit to forced “vaccinations.”
The vax mandate is in-step with the primary motive of the Democratic party’s neo-Jacobin program, which is to push people around, to coerce them to do things that common sense and the instinct for survival argue against, and then to punish the people sadistically when they refuse, and to do it for the sheer pleasure of inflicting harm on their enemies - who happen to be the citizens of the USA. That is your “Joe Biden” government, from top to bottom, a matrix of fakeness and malice.
The vax mandate is doing a stellar job of wrecking every other public service from sea to shining sea as police, firemen, EMTs, 911 operators, and soldiers in the US military demur from the shots. And, of course, there are all he private companies going along suicidally with the scheme: the airlines, the railroads, the truckers, the retailers, you name it, all shedding employees and the ability of the companies to function. Naturally, the news media is trying to hide the damage, but in another week the net effect will be of the world’s biggest-ever general strike. Every activity in the country will stand still; some activities will just crash-and-burn; and many will not return to their prior states-of-operation.
This is not just a matter of the kiddies missing their Christmas presents. That’s just a dumb-ass sentimental ruse to divert your attention from the entire armature of American life imploding at warp speed. Christmas presents! How about no food, no gasoline, no heat, no money, and no public safety? That’s where this is taking us, and in the fast lane. And it hardly matters whether the financial markets manage to stay artificially levitated. Reality has already discounted the financial markets because they have forfeited their basic function, which is to signal the true price of everything. The true price of a society lying to itself about everything will be the sickness and death of the society.
We must be very close to a clear majority of the people in America recognizing the danger we are in and identifying the source of that danger. When that moment arrives, will we be able to do anything about it? It may take extraordinary measures not seen before in our political history."
- https://kunstler.com/
Posted by CoyotePrime at 9:34 AM