"Headed to the Pampas" 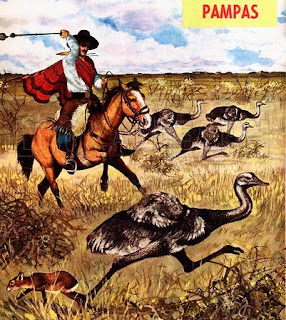 "Headed to the Pampas"
by Bill Bonner
BALTIMORE, MARYLAND – "An intriguing item in the Argentine press caught our eye. Referring to rising public anger in the midst of an economic crisis… the Buenos Aires Times reports that tempers: "…came to a boil one recent evening, when a hungry mob forced a [cattle truck] driver to let out a cow and proceeded to slaughter it right there on the street."
Hmmm… that’s not likely to happen in the U.S. America’s urban mob is probably unaware that beef comes from animals. And it would have no idea how to butcher one. Instead, annoyed by consumer price increases and the arrogance of the ruling elite, it will shut down airlines… hospitals… and the whole supply chain. Food will disappear from the shelves. Gasoline pumps will go dry. Mobs will form in the streets…
And who knows? Maybe Donald Trump will be re-elected! Then, with his customary numbskull bravado, he will make the situation even worse.
Fed’s Fraudfest: But wait, we’re getting ahead of ourselves. We saw yesterday, Ms. Janet Yellen, Secretary of the Treasury – along with the whole Elite Establishment – is seeking to eliminate anything and everything that might get in its way.
Debt ceiling… tax competition… And the privacy of bank accounts, too. Here’s The New York Times on a recent Biden Administration proposal: "…The administration wants banks to give the Internal Revenue Service new details on their customers and provide data for accounts with total annual deposits or withdrawals worth more than $600." Day by day, the ramparts are battered. The elite shock troops advance. Nothing will be allowed to stop the fraudfest. Tax… spend… borrow… print.
Good Guess: But where does it lead? Twenty years ago, looking into the future, we saw a long journey ahead. It would take the U.S. to Tokyo… then to Buenos Aires. By that, we meant we were in for a slog of punky asset prices and a sluggish on-again, off-again recession, à la Japan… to be followed by money-printing, leftish populism, and inflation, como en la pampa. Of course, we were just guessing. But we were right… and we were wrong.
America’s Main Street economy declined – just as it had in Japan. So far this century, GDP growth rates have been cut in half… real, net investment has been flat… and adjusted for inflation, real industrial production has gone down, despite the addition of 50 million people. And left-ish, Argentine-style populism arrived, too – in the form of the aforementioned Mr. Trump.
Boom to Bust: But over on Wall Street, it was a different story. It was get-down-and-boogie time, with a big bust in the Nasdaq in 2000… followed by a boom-bubble-and-bust cycle that ended in 2008… followed by another one ending in 2020. Each time, the bust was followed by a printing lalapaloosa at the Federal Reserve and a BTFD (buy the f**king dip) reaction by investors… leading to another bubble cycle. But it all depends on printing more and more money. And how long can that go on? Is it just a matter of time before stocks crash and cows are butchered in the streets of Boston?
Tomorrow’s News: Today, we saddle up… with a cushy fleece on the hard Argentine seat; we aim to range wide and far. We’re going to explore that enchanting land south of the Río de la Plata. What are we looking for? A glimpse at tomorrow’s headlines, of course. If we’re right, Americans are headed to the pampas…
Here’s a headline from the Buenos Aires Times that we think we’ll see here in the U.S. in a few years: "World Bank Economist Rules Out Risk of Hyperinflation in Argentina." The World Bank has ruled out the risk of hyperinflation in Argentina, where year-on-year prices have surged more than 50 percent, and believes a new agreement with the International Monetary Fund (IMF) regarding the country’s multi-billion-dollar debt will further reduce that possibility.
“I don’t see that risk,” said William Maloney, the World Bank’s chief economist for Latin America and the Caribbean, at a press conference on Wednesday, when asked about the threat of consumer prices spiralling out of control in consumer prices in Argentina. Inflation is around 50 percent but the government still has some tools to prevent the crisis from deepening.”
What a relief. The gaucho feds only steal half your savings every year… or 100% in 24 months. Is that what’s coming in the U.S., too? Just change “Argentina” to “USA”? We can live with that, right? Right? We’ll find out more, tomorrow…"
- www.rogueeconomics.com
Posted by CoyotePrime at 11:44 AM