"A Night at the Opera" 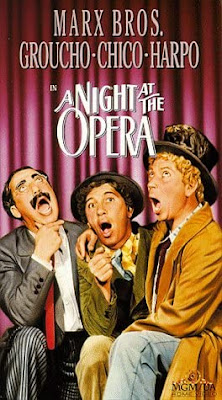 "A Night at the Opera"
by Bill Bonner
"Now on with the opera. Let joy be unconfined. Let there be
dancing in the streets, drinking in the saloons, and necking in the parlor."
– Groucho Marx in "A Night at the Opera"
BALTIMORE, MARYLAND – The end of last week brought joy – the debt ceiling was raised… the bars were open. And Republicans and Democrats, after pretending to be at each other’s throats, were necking in the parlor. The whole episode deserves at least a footnote in economic history, for rarely has a public spectacle been so completely phony. It was like a funeral for someone who wasn’t dead yet; unsatisfying for everyone. We will try to memorialize it here… for future economic historians to laugh at.
Dramatic Tension: The dramatic tension came, we were told, from the need to raise the debt ceiling. With mock solemnity, the newscasters, opinion mongers, economists, professional investors, and politicians told us that our future (and by inference, the future of the whole planet) depended on raising the debt ceiling for the 79th time.
Here’s American historian, Heather Cox Richardson, who regularly misunderstands almost everything. She imagines the debt ceiling standoff as another battle between Democrats (good) and Republicans (bad): "Today, [last Thursday] Senate Minority Leader Mitch McConnell (R-KY) backed down from his obstructionism, agreeing to let the Democrats raise the debt ceiling by a simple majority rather than by the 60 votes they needed when the Republicans kept filibustering their bills."
A quick recap: the issue at stake was whether the United States would default on its debts, which it has never done before. The threat to default was purely a political ploy on the part of the Republicans to try to force the Democrats to abandon their very popular infrastructure measure.
Political Theater: As we have pointed out many times, this was untrue. Both protagonist and antagonist were in agreement. That is why the conclusion was never in doubt. Everything else was political theater of the lowest, most debauched grade. But it was the only show the press wanted to see. Reporting the real truth would have left the whole flimflam exposed.
All the elite – all of it – was lined up in favor of the obvious outcome. It not only wanted Congress to raise the debt ceiling… but to eliminate it altogether. All agreed, too, that the Fed should continue to use this money to buy bonds… so as to keep interest rates at fake, ultra-low levels… so that stocks (owned almost exclusively by the upper 10%… including politicians of both parties, the media, the bureaucracy, Wall Street, university and medical care functionaries… and all the apparatchiks and nomenclatura of the Deep State elite)… would remain at fake levels…and so that the government – whether red or blue – would be able to use the fake money to fund its grifter programs.
Flaming Scam: As we’ve seen, government programs are intended to fail… and rarely miss the mark. And in last week’s fraudfest, neither side… Republican nor Democrats… nor any mainstream news media… ever even whispered the truth – that the whole thing was a flaming scam.
Fake money, fake interest rates, fake asset prices, fake programs, with fake objectives, presided over by fake politicians, performing a fake show… for the benefit of a fake media, that doesn’t even try to get to the truth…
And all agreed that if the fakiness were suddenly interrupted… it would be a “catastrophe.” Here’s Joe Biden’s “old buddy,” JPMorgan CEO Jamie Dimon (a card-carrying member of the super-elite), speaking to the president last week: "America’s role in the world is essential. We are the bedrock – the American Treasury is the bedrock. […] We’re being watched right now by our allies and, unfortunately, our enemies. Our credibility is absolutely essential. Trust in America and the U.S. dollar and the financial system is critical to the world economy and eventually, actually, world peace."
Really? The U.S. has to keep spending money it doesn’t have… on things it doesn’t need – including military garrisons all over the globe – for the benefit of world peace?
Right.
Claptrap and Deceit: Last week’s debt-ceiling brouhaha brought fraud to a new level – a crescendo of claptrap… a denouement of deceit… an acme of absurdity. The feds have plenty of money to pay the debt – with tax receipts of $3.8 trillion this fiscal year – and to keep the major boondoggles in business. There was never a need to raise the debt ceiling… except one, single reason: It allows the elite to continue ripping off the public."
- www.rogueeconomics.com
Posted by CoyotePrime at 10:17 AM