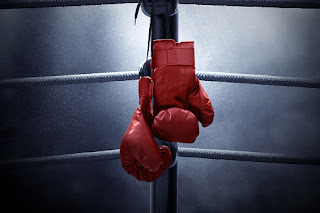 "The Champ"
by CP
"Ding, ding, ding, you hear the bell for the start of the fight, hear the crowd, noisy, excited to see this rematch between you and Life. You're here, and still the Champ, right? Fought this guy so many times before, always beat him, too, though you took many a beating yourself in the process, each fight a little tougher, taking a little more out of you each time. You meet in the center of the ring... damn, has this guy grown somehow? He looks bigger, more muscled, and has a real confident look in his eye. So what? You're the Champ, still standing, right? Let'sget it on!
Ding, ding, ding, you meet him in the center of the ring, toe to toe, jabbing, bobbing and weaving, feeling each other out. He seems faster than you remember, while your own punches are a hair slower, not quite able to connect solidly, while his land solidly, crisply, heavily. He lands a tremendous body shot to your side, knocking the air right out of you, and you clinch him desperately, sucking in as much air as you can while he hammers away at you, your forearms blocking most, but not all, of those heavy, heavy punches.
Ding, ding, ding, the bell ends the round and you sit on your stool, hearing the trainers tell you how to fight this guy, "Don't clinch with him, he's too strong, he'll bust you up!" "Dance, man, side to side, bob and weave, don't give him anything to hit! Jab and dance away, jab, jab, jab..." words you've heard so many times before. You think of previous bouts with this guy, the loss of a job when you had a family to support, the bitter divorce, the deaths of loved ones, and every time he came wanting to knock your head off, but your will power, training and instincts always kept you standing at the end, still the Champ, right? But this time, something's not right, something's different somehow.
Yeah, time's gone by, not so young or strong as you once were, not as fast, don't recover as fast, but haven't been taken out yet, right? And everybody knows the rules, the only way he wins is to knock you out, you just gotta hang on, take his best shots and give him all you got until that bell rings for the end of the fight, and if you're still there, still standing, you win. Still the Champ, right? Round after round after round...
Ding, ding, ding, last round, you're feeling so tired, legs almost gone, no snap to the punches, but he looks fresh, strong, and bores in with a mean intent, landing hammer blows, knocking you back towards the corner where he wants you, you try dancing sideways, he cuts off the ring, no escape that way, and keeps coming in. A thunderous right cross lands smack on your chin, everything turns black for a second, legs about to go as the instincts kick in and you throw your body back out of the way, sucking in as much air as you can, shaking your head to clear the blurriness, but you're in the corner now, where he wants you, and here he comes with a vengeance, fast, strong, wanting the knockout, but you're still standing, still the Champ, right? Right?
Ding, ding, ding..."
Posted by CoyotePrime at 12:24 PM