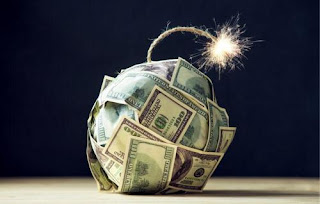 "A Trillion Here, A Trillion There"
by Clifford Thies
"The late Everett Dirksen, a long-serving Minority Leader of the Republicans in the U.S. Senate, is famously quoted as saying a billion here, a billion there, and soon we’re talking real money. That was back in 1969. At the time, a billion dollars was about one-tenth of 1 percent of GDP. What about today?
During 2020, the federal government provided a total of $3.2 trillion of Covid relief, starting with a mere $8.3 billion, then adding $104 billion, then adding $2.2 trillion, and finishing off the year with another $900 billion. We’re now three months into 2021, and the federal government has provided yet another $1.9 trillion in Covid relief; and, the Biden administration has just asked for $2 trillion for infrastructure. To put these amounts into perspective: A trillion dollars is today about 4 percent of GDP.
Back in 1969, Ol’ Everett was being funny when he referred to a billion dollars. Back then, a billion dollars was already real money. In 1969, the newest nuclear-powered aircraft carrier, the USS Enterprise, cost $451 million, not even $1 billion. The cost of the Apollo 11 mission to put the first man on the moon wast $335 million, not even $1 billion. Only two companies made more than $1 billion in profits (General Motors $1.7 and Exxon Mobil $1.3). A billion dollars, representing one-tenth of 1 percent of GDP, was a fantastic amount of money. Ol’ Everett’s statement that a billion here and a billion there and soon we’re talking real money was a wild understatement.
And, now, we’ve gone from thinking of spending money at a clip of one-tenth of 1 percent of GDP to thinking of spending money at a clip of 4 percent of GDP, as though 4 percent of GDP isn’t already real money.
Back in 1969, the newest aircraft carrier cost about half of one of Dirksen’s billions. What about today? How does the cost of the newest aircraft carrier, the USS Gerald Ford, compare to a trillion dollars? The Gerald Ford cost $13 billion. That’s about a hundredth of a trillion dollars.
Back in 1969, the premier space mission of the year cost about a third of one of Dirksen’s billions. The cost of this year’s Mars mission, at $3 billion, is about one three-hundredth of a trillion dollars.
Back in 1969, two companies made more than a billion dollars. Today, no company makes anywhere near a trillion dollars. Apple, the most profitable, makes $60 billion.
I don’t know if Ol’ Everett knew this, but his expression “a billion here, a billion there” was a crazy twist on a yet even older expression, as in the following poem concerning John D. Rockefeller:
"Old Rox, the great philanthropist, gives wealth till people wonder.
And all he gives is never missed, he has such heaps of plunder.
A million here, a million there should buy him bliss eternal
If all the facts are printed fair in each and every journal."
– George Matthew Adams, 1912
The small-minded author of this poem thought to denigrate the generosity of Rockefeller, as though lowering the price of kerosene from 26 to 8 cents a gallon wasn’t already a great benefaction to mankind, on top of which Rockefeller gave away much of the fortune he accumulated by serving his customers so well. But there are big differences between giving away millions of your own money, as compared to adding several billions to the deficit in the 1960s, and adding several trillions to the deficit in 2021.
The first thing is an act of charity. A voluntary increase in the purchasing power of others, at the cost of reducing one’s own purchasing power. The second is either the promotion of the general welfare or redistribution of the wealth. It is legitimately the stuff of politics. The borderline between promoting the general welfare and mere redistribution is often murky. And, the third is simply impossible and will cause rampant inflation.
Among the useful functions of money is that it forces people to make choices. To take stuff out of the economy (as in buying), most people have to put stuff in (as in working). This forces people to evaluate the value of what they want against the value of what they have to give. To a limited extent, saving and borrowing, insurance, charity, and taxation and redistribution relax the balancing of taking and giving at the individual level. But, in the end, the total of what comes out of the economy is limited by the total of what is produced, no matter that you can borrow or print up unlimited amounts of money. Borrowing and printing up trillions and trillions of dollars isn’t real. It’s a special form of deceit we economists call inflation."
- https://www.zerohedge.com/
- https://www.aier.org/
Posted by CoyotePrime at 8:24 AM