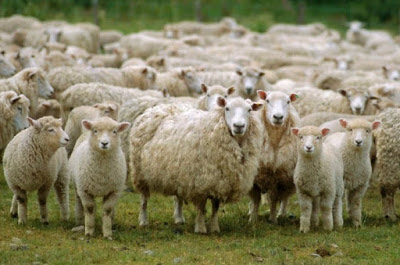 “Sheeple”
by CCRider
“I get so disgusted with people at times I can barely control my emotions. Standing in line at a grocery store earlier today there was a young mother and her daughter I would guess to be about three years old, both (of course) wearing masks. I have no doubt the mother was of normal intelligence and cared deeply for her child. I pitied them both. In front of her was a lady in a powered shopping cart who was morbidly obese. Her cart was loaded with processed foods, high-fructose corn syrup soda and other poisons. She was wearing a mask and surgical gloves.
How often have you wondered how people will so instinctively follow absurd and self-destructive dictates? Why does propaganda work so well? It can’t be stupidity. Hitler led Germany to slaughter and dismemberment and the Germans are among the smartest people in the world. It boggles the mind and depresses the spirit. It’s not enough to simply call them sheeple. That doesn’t satisfy the intellect. There has to be a reason. It turns out there is a good reason and it’s uncomplicated and the answer has been available for hundreds of years.
Only Murray Rothbard could have found an obscure original thinker five hundred years earlier who explains in the simplest terms why people can be made to so slavishly adhere to the ridiculous and dangerous dictates of a single ‘authority’ figure. Frenchman E’tienne de La Boe’tie wrote a book that explains this phenomenon. Its title is ‘Discourse on Voluntary Servitude”. I came across it when I was first enthralled by Rothbard’s writings 40 years ago. It played a major role in my hatred of government ever since.
The following interview gets into the details of this book. Like Rothbard himself, James Corbett has the ability to fix laser-like on the most logical path to understanding. Here he is interviewed by Keith Knight on the subject. Knight is a wonderful interviewer who did his homework. It’s 45 minutes long but if you listen to the first 6 minutes I think you will be hooked.
Keith Knight of “Don’t Tread on Anyone” interviews James Corbett about “The Politics of Obedience: The Discourse of Voluntary Servitude”, the 16th century treatise on tyranny and obedience by Étienne de La Boétie. James and Keith highlight some of the book’s key insights and detail how they apply every much to our situation today as they did when they were written.”
- https://www.theburningplatform.com/
○ 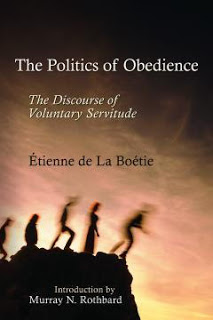 Freely download “The Politics of Obedience:
The Discourse of Voluntary Servitude”, by Étienne de la Boétie, here:
- https://mises.org/library/
Posted by CoyotePrime at 12:02 PM