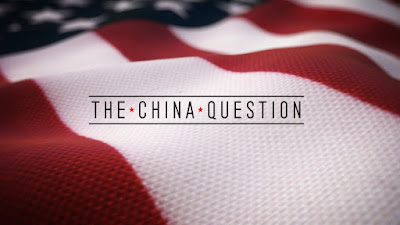 "The China Question"
by The Zman
"A popular topic among Sinophiles since the installation of Joe Biden as president is the possibility of war with China over the status of Taiwan. The Chinese have been obsessed with Taiwan since Mao. With the American empire in sharp decline and the Biden regime unpopular at home and abroad, now could be the perfect time for the Chinese to make their move. As John Derbyshire is fond of pointing out, “Taiwan is like two feet from China … We are eight thousand miles away.”
While there is little doubt that China could retake Taiwan whenever it likes, the cost would be extremely high. For starters, Taiwan and the US have been preparing for such a move for generations. Some of the most sophisticated early warning systems on earth are installed in Taiwan specifically keep an eye on China. There is the very strong possibility that Taiwan has underground missile systems capable of reaching targets on the mainland in the event of an attack by China.
Whether or not the US would actually go to war to defend Taiwan is debatable, but that is the official position. Japan, South Korea, the Philippines, and Australia are also technically committed to the defense of Taiwan. An all-out assault on Taiwan could very well result in attacks on Chinese infrastructure along the coast. It would most certainly result in massive economic retaliation. The Chinese regime would be forced to explain to her people why they are suddenly poor again.
Of course, the Chinese could counter with attacks on Japan, South Korea, the Philippines, and Australia. Her navy is the largest in the world now, even if it lacks the forward capability of the American empire. It could deliver attacks on her neighbors, including Hawaii. In an all-out war, she could attack the west coast of the United States with submarine based missiles. The point is, China is not Iraq, some pipsqueak the US military can kick around without consequences.
That reality, however, is why such a full-blown confrontation is unlikely. Despite what many believe, China is hooked on the dollar like the rest of the world. She cannot afford war with the US at this time. The reason the Chinese flooded the American election system with cash in 2020 is the Trump administration was causing real problems for the Chinese with their trade policies. No one can be sure if the Covid plague China unleashed was an accident, but you cannot rule it out.
The point being is that an economic war with the American empire would be catastrophic for the Chinese economy. The usual suspects love crowing about the Chinese economy, but her per capita GDP is $10,839. That is down there with Costa Rica and Bulgaria. China has a lot of poor people. The rich people she has are obligated to make sure those poor are provided with the basics. The iron rice bowl is a real thing, and the Chinese regime takes it very seriously.
There is also the fact that China is smart. She can take the long view with Taiwan as she knows in a generation the American empire will be gone. Given the physical condition of the ruling class and the mental condition of the probable successors, the American empire will be out of Asia in a decade. Japan, South Korea, the Philippines, and Australia all know this and have been planning accordingly. China can just bide her time and Taiwan will come to her, hat in hand.
There is also the possibility this happens much quicker. It is clear to the world that Joe Biden is non compos mentis. Whoever is calling the shots is not bothering to consult the White House. This is why there is a crisis in the Ukraine. Someone from the semi-permanent ruling class encouraged Kiev to declare her intention to retake the Crimea, which has resulted in a stand-off with the Russians, who have no intention of allowing Ukraine to make any moves on the Crimea.
Then there is the dispute over Nord Stream 2, the new natural gas pipeline being built to supply western Europe. Shadowy financial interests in the American empire have been trying to stop this project for a long time. Biden administration figures have been dispatched to Europe to deliver a message from those shadowy financial interests that the Washington regime will pull out all the stops to prevent this project. This is further undermining the credibility of the Biden regime.
From the Chinese perspective, she has no reason to make any moves on Taiwan, as the puppet government in Washington is unlikely to stagger on much longer. Despite the claims by regime media, the world fully grasps the reality of the situation. The American regime is in deep crisis. The American empire is the sick man of the world right now and everyone is just waiting for the inevitable. History shows that the end comes much sooner than the patient ever expects.
The point of all this is that China has no reason to force a confrontation with the American empire over Taiwan. Through bribery, maneuvering and the general incompetence of the American ruling elite, China can quietly dictate policy to the regime in Washington. If she is patient, this reality will become clear to her neighbors in the region, and they will peacefully detach from the American empire and align with the Chinese empire. There is no need to fight the inevitable."
- https://www.theburningplatform.com/
- http://thezman.com/wordpress/
○
Related:
APR 07, 2021 - 4:20 PM: "Taiwan Warns It Will 'Fight To Very Last Day' If China Attacks As US Warship Transits Strait"
Posted by CoyotePrime at 9:04 AM