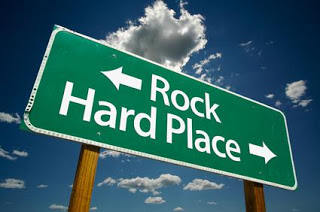 “Incidit In Scyllam Cupiens Vitare Charybdim”
by Steve Candidus
“One of the great things about ancient Greek Mythology is that the stories all teach a lesson. They don’t end with – and the moral of the story is – though. They leave it to the reader to figure them out. So in addition to being just plain fun to read they are wonderful teachers about life. Perhaps the best thing about this one is that we still use the expression it contains exactly the same way that the ancient Greeks intended it almost 3,000 years ago. That almost never happens. Language is fluid and the meanings of words and expressions changes from one generation to another, but this one is an exception. The everyday expression it contains is one that we often refer to without really knowing where it came from.
This is one of the tales of Odysseus who was the heroic king of Ithaca and of whose ten-year journey back to Greece after the Trojan War was immortalized in Homer’s ‘Odyssey’. There was a point in his journey when his ship had to enter a narrow strait. It was a passage so narrow that it could only be made under special conditions. They had to have both the wind at their backs and the current in their direction. However, once committed it was impossible to turn back.
Unknown to the sailors the strait was guarded by two deadly perils. On the one side, it was guarded by Scylla. Scylla was a six-headed monster that disguised itself as a rock. On the other side, it was guarded by Charybdis, a terrible deadly whirlpool born of the sea god Poseidon.
In olden times, it was common to refer to any place that a ship came to rest on land as being in a hard place. It didn’t matter if it was blown on shore by a storm, grounded on a reef or brought up intentionally for repair. If it was on shore, it was on a hard place as opposed to the soft place – water.
It also applied to a ship that had foundered. A ship that sinks will eventually rest on the bottom. The land at the bottom of the ocean is therefore called a hard place. It used to be a common term, but it has since pretty much fallen out of practice in common language today. A deadly whirlpool such as Charybdis could take a ship and send it straight to the bottom – a hard place.
So, now as we return to the story of Odysseus we see that their ship had entered a narrow strait and that strait was guarded by two evil perils with hardly enough room for a ship to pass between them. They were forced to choose between the six headed monster ‘Scylla’ disguised as a rock or the dreaded whirlpool ‘Charybdis’ that would surely send them to a hard place and they could not turn back.
There is a Latin proverb from this story, “Incidit in Scyllam cupiens vitare Charybdim” which translates to, “He runs on Scylla, wishing to avoid Charybdis.” In modern day English, we simply say, “They were between a rock and a hard place”. And now you know…”
- https://www.theburningplatform.com/
Posted by CoyotePrime at 4:08 PM