"What Could Go Awry?" 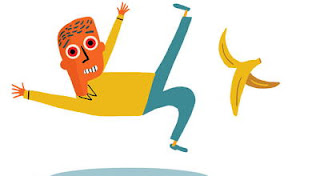 "What Could Go Awry?"
by Charles Hugh Smith
"What a remarkable moment in time: every asset is lofting higher, with no limits in sight. The path ahead is already well-scouted: the U.S. economy will add a million jobs a month until the cows come home, Covid will continue fading until it basically disappears as an issue, the dollar and volatility will continue their death-march toward zero (good for risk assets), oil and commodities are entering a new super-cycle of growth, as are stocks, bonds (now that pesky yields are falling), cryptocurrencies and housing-- all are entering super-cycles of high growth and essentially limitless expansion of speculative gains.
It's dreadful having a skeptical default setting, but there you have it: what could go awry? Seemingly nothing. Everything's accounted for and for anything out of the blue, we have the trusty Fed Put, the Federal Reserve's implicit promise to crush any spot of bother with a wall of freshly issued dollars and near-infinite credit. Look on our works, ye Mighty, and despair, for we are the greatest power in the Universe! Resistance is futile, and so on. Indeed.
Since we're in an era in which speculators in any asset can't possibly lose, it's no surprise that punters are borrowing buckets of cash to increase their stake in the casino's can't lose gaming tables. The chart of margin debt offers an instructive history of can't lose speculative borrowing.
Margin debt is money borrowed from brokers against the collateral of stocks, mutual funds, ETFs, etc. The more your portfolio rises, the more money you can borrow on margin because your collateral is rising. Let's start with the sad, pathetic pre-speculative Stone Age of the 1950s, 60s and 70s, dreary decades of rapid economic expansion and higher wages but dismally low levels of margin debt. The poor cave-creatures back then made little use of margin debt because their lives were an unending misery of risk. Back in that Dark Age, stock market participants could actually lose money - oh the horror!
The Black Death of risk roamed the land unhindered, until the all-mighty Federal Reserve established its impregnable fortress of the Fed Put: every market decline will be crushed, and speculators will be rewarded. And so the glorious age of Speculative Mania began. The rules to guaranteed gain were simple:
1. Buy every dip, as the Fed Put would soon reverse any decline.
2. Borrow as much money as possible and throw it onto the gambling tables because the larger your bets, the greater your gains.
With risk vanquished, everyone who embraced speculation became a winner - a big winner. Only chumps didn't buy GameStop calls and reap a quick $250,000 or more in a few weeks. And so margin debt soared and speculators prospered. All was right with the world. But then inexplicably, some sort of glitch occurred and the dot-com euphoria popped and stocks actually dropped. Punters received the dreaded margin call for cash or they had to liquidate their positions to reduce their margin debt.
Stocks soon recovered, and easy-to-borrow money flooded into housing and stocks, lifting markets to new euphoric heights. Another inexplicable glitch occurred, however, and that bubble popped, too, with extremely awkward consequences - the Global Financial Meltdown. But after the Fed tossed around a few tens of trillions of dollars in backstops, guarantees, mortgage purchases, bond-buying, lines of credit for any bank that faced losses, and so on, that strange interlude ended and margin debt and speculative gains continued their march to new heights of glory and guaranteed gains. 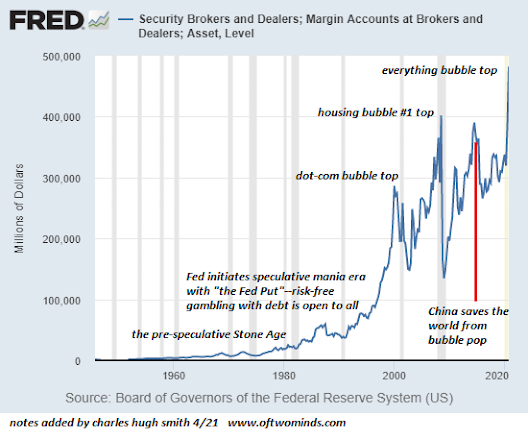 Which brings us to the present unprecedented levels of margin debt and can't lose speculative mania. Everyone is supremely confident that inexplicable glitches are now impossible, and nothing can possibly go awry on the path to new super-cycles of growth and speculative gains.
All of which sounds very pretty indeed, but it does raise a question: can risk really be destroyed, or can it only be transferred? And if it can only be transferred, then what's it been transferred to? The only possible answer appears to be the financial system itself. But never mind skeptical questions, the Fed Put is now the greatest power in the Universe and so speculative gains are guaranteed, forever and ever."
"'Look on my works, ye Mighty, and despair!'
Nothing beside remains. Round the decay
Of that colossal wreck, boundless and bare
The lone and level sands stretch far away."
- https://www.oftwominds.com/
Posted by CoyotePrime at 7:32 AM