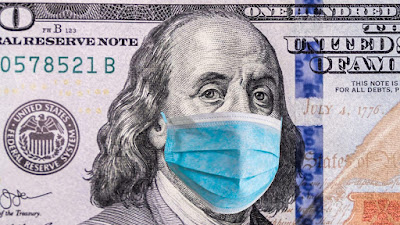 "The Feds’ Dumbbell Monetary Experiment"
By Bill Bonner
YOUGHAL, IRELAND – Yesterday, we argued that the U.S. is in decline. But if it is declining, it must be declining against something else. What? We don’t have to tell you, Dear Reader. You already know. Here’s the latest from The Wall Street Journal: "China Creates its Own Digital Currency, a First for Major Economy." "A thousand years ago, when money meant coins, China invented paper currency. Now the Chinese government is minting cash digitally, in a re-imagination of money that could shake a pillar of American power.
It might seem money is already virtual, as credit cards and payment apps such as Apple Pay in the U.S. and WeChat in China eliminate the need for bills or coins. But those are just ways to move money electronically. China is turning legal tender itself into computer code. […] China’s version of a digital currency is controlled by its central bank, which will issue the new electronic money. It is expected to give China’s government vast new tools to monitor both its economy and its people. […] The money itself is programmable. Beijing has tested expiration dates to encourage users to spend it quickly, for times when the economy needs a jump-start. It’s also trackable, adding another tool to China’s heavy state surveillance."
More Control: As far as we can tell, almost all money today is nothing more than electronic notations. We buy a cup of coffee. We tap our debit card on the little machine. Somehow, one account is debited and another credited. We can later see a record of it to confirm that what happened was what we thought happened. But apart from the “information,” nothing has changed hands.
A “digital currency” might not change much. The transaction would remain the same, with information passed electronically from one bank to another. But as The Wall Street Journal notes, China’s new digital currency gives the government more control over the electrons. It will be able to decide who gets them… and who doesn’t. This is a major experiment, and one that the U.S. will want to follow closely. Having money that comes directly from the Federal Reserve would give the federales whole new opportunities for mischief.
New Powers: What’s more, in the U.S., gaining tighter control over “money” may soon be a matter of desperate national importance. In the modern world, a nation rises in wealth and power by providing goods and services. In this regard, China has set new records – leaping from a hopeless backwater to a great world power in just a single generation. It did so by producing things on a gargantuan scale. This output was sold to people in other countries. They paid with “money,” which passes, typically, from the declining power to the rising one.
How this new digital money will work out for China, we have no idea. It’s new. Never been tried. If it is stable, and backed by a sensible, reliable government, perhaps it will catch on… and help the Chinese attract more capital and become even richer and more powerful. Perhaps this new currency will cause other nations to dump the U.S. dollar as a reserve currency and switch to China’s new money. Or perhaps the Chinese feds will be tempted to use their new powers the way bullies and bureaucrats always do… to stifle entrepreneurs, mislead businesses, and dull the sharp, dynamic edge that has been so successful for the Chinese so far. Again, we don’t know.
Bribes and Scams: But meanwhile, back in the USA… the feds are conducting their own monetary experiment. They’re seeing how much gas they can pump into an old-fashioned, “fiat” money (with no gold backing) system before the whole shebang blows up. This is an experiment that has been run before – many times. We believe we know how it will work out.
U.S. debt crossed the $28 trillion mark last month… And the Biden Team has just proposed the most expensive boondoggle in U.S. history, advertising that it would help us to “win the global competition with China.” The foolishness and boondogglishness of the latest “infrastructure” proposal is almost comic. There is little infrastructure in it… and what is in it shouldn’t be. Except for the interstate highways, infrastructure is a matter for local communities and businesses, not for the feds.
It is really just a monstrous grab-bag full of giveaways, payoffs, bribes, and scams. And each one of these boondoggles squanders real resources, energy, and time. A few insiders get richer, but everybody else ends up poorer. “Never interrupt your enemy when he is making a mistake,” said Napoleon. The Chinese haven’t said a word.
Handy Alternative: In the feds’ fantasy world, money is unlimited. But in the real world, time and resources are not. And as the feds print more “money,” the rising tide of new dollars lifts prices for cement, soybeans, diapers, milk, houses, stocks, Graham crackers, tennis rackets, taxi fares… practically everything. At least, that was the outcome every other time this experiment was run.
And by introducing a new currency, the Chinese could be hitting the U.S. where it is most vulnerable. The U.S. feds can control many elements in their fantasy world. They can create “money” out of thin air. They can create make-work jobs. They can increase ersatz “demand” – by giving away more fake money. They can goose up stock prices… and suppress interest rates. The thing they can’t do is control the value of their phony-baloney dollars. And when it becomes more obvious that the morons have lost control of the dollar, the new digital yuan may look like a handy alternative."
- www.rogueeconomics.com
Posted by CoyotePrime at 3:15 PM