"A Look to the Heavens With Chet Raymo, 'The Journey'” 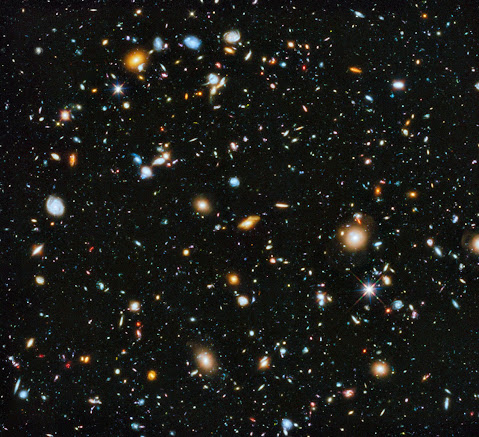 Click image for larger size.
“The Journey”
by Chet Raymo
“Here’s a Sloan Digital Sky Survey map of the universe. This Sloan Digital Sky Survey map of the universe is 2 billion light-years deep. Each point represents a galaxy with a measured redshift. Maps like this have revealed the signature of enormous sound waves rippling through the early universe.
A smoke of galaxies! (2 trillion galaxies according to latest estimates.- CP) A universe cobwebbed with Milky Ways! Each galaxy itself a smoke of stars, hundreds of billions of stars, many or all of them with planets. My book, “Walking Zero,” is about the human journey from the omphalos of our birth into the world of the galaxies, a journey many of us are disinclined to make. Here is how the Prologue to the book begins:
“Each of us is born at the center of the world. For nine months our physical selves are assembled molecule by molecule, cell by cell, in the dark covert of our mother’s womb. A single fertilized egg cell splits into two. Then four. Eight. Sixteen. Thirty-two. Ultimately, 50 trillion cells or so. At first, our future self is a mere blob of protoplasm. But slowly, ever so slowly, the blob begins to differentiate under the direction of genes. A symmetry axis develops. A head, a tail, a spine. At this point, the embryo might be that of a human, or a chicken, or a marmoset. Limbs form. Digits, with tiny translucent nails. Eyes, with papery lids. Ears pressed like flowers against the head. Clearly now a human. A nose, nostrils. Downy hair. Genitals.
As the physical self develops, so too a mental self takes shape, not yet conscious, not yet self-aware, knitted together as webs of neurons in the brain, encapsulating in some respects the evolutionary experience of our species. Instincts impressed by the genes. The instinct to suck, for example. Already, in the womb, the fetus presses its tiny fist against its mouth in anticipation of the moment when the mouth will be offered the mother’s breast. The child will not have to be taught to suck. Other inborn behaviors will express themselves later. Laughing. Crying. Striking out in anger. Loving.
What, if anything, goes on in the mind of the developing fetus we may never know. But this much seems certain: To the extent that the emerging self has any awareness of its surroundings, its world is coterminous with itself. We are not born with knowledge of the antipodes, the plains of Mars, or the far-flung realm of the galaxies. We are not born with knowledge of Precambrian seas, the supercontinent of Pangea, or the Age of Dinosaurs. We are born into a world scarcely older than ourselves and scarcely larger than ourselves. And we are at its center.
A human life is a journey into the grandeur of a universe that may contain more galaxies than there are cells in the human body, a universe in which the whole of a human lifetime is but a single tick of the cosmic clock. The journey can be disorienting; our first instincts are towards coziness, comfort, our mother’s enclosing arms, her breast. The journey, therefore, requires courage – for each individual, and for our species.
Uniquely of all animals, humans have the capacity to let our minds expand into the space and time of the galaxies. No other creatures can number the cells in their bodies, as we can, or count the stars. No other creatures can imagine the explosive birth of the observable universe 14 billion years ago from an infinitely hot, infinitely small seed of energy. That we choose to make this journey – from the all-sustaining womb into the vertiginous spaces and abyss of time – is the glory of our species, and perhaps our most frightening challenge.”
- http://blog.sciencemusings.com/
Posted by CoyotePrime at 4:58 PM