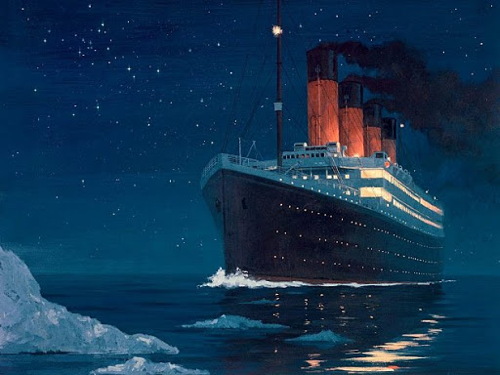 "The 'Titanic' Analogy You Haven't Heard:
Passively Accepting Oblivion"
by Charles Hugh Smith
You've undoubtedly heard rearranging the deck chairs on the Titanic as an analogy for the futility of approving policy tweaks to address systemic crises. I've used the Titanic as an anology to explain the fragility of our financial system and the "glancing blow" of the pandemic:
"Why Our Financial System Is Like the Titanic" (March 15, 2015)
"Coronavirus and the "Unsinkable" Titanic Analogy" (January 29, 2020)
But there's a powerful analogy you haven't heard before. To understand the analogy, we first need to recap the tragedy's basic set-up.
On April 14, 1912, the liner Titanic, considered unsinkable due to its watertight compartments, struck a glancing blow against a massive iceberg on that moonless, weirdly calm night. In the early hours of April 15, the great ship broke in half and sank, ending the lives of the majority of its passengers and crew. Of the 2,208 passengers and crew onboard, 1,503 perished and 705 survived. The lifeboats had a maximum capacity of 1,178, so some 475 people died unnecessarily. Passengers of the Titanic (Wikipedia)
The initial complacency of the passengers and crew after the collision is another source of analogies relating to humanity's near-infinite capacity for denial. The class structure of the era was enforced by the authorities - the ship's officers. As the situation grew visibly threatening, the First Class passengers were herded into the remaining lifeboats while the steerage/Third Class passengers - many of them immigrants - were mostly kept below decks. Officers were instructed to enforce this class hierarchy with their revolvers.
Two-thirds of all passengers died, but the losses were not evenly distributed: 39% of First Class passengers perished, 58% of Second Class passengers lost their lives and 76% of Third Class passengers did not survive.
Rudimentary calculations by the ship's designer, who was on board to oversee the maiden voyage, revealed the truth to the officers: the ship would sink and there was no way to stop it. The ship was designed to survive four watertight compartments being compromised, and could likely stay afloat if five were opened to the sea, but not if six compartments were flooded. Water would inevitably spill over into adjacent compartments in a domino-like fashion until the ship sank.
What did the authorities do with this knowledge? Stripped of niceties, they passively accepted oblivion as the outcome and devoted their resources to enforcing the class hierarchy and the era's gender chivalry: 80% of male passengers perished, 25% of female passengers lost their lives. The loading of passengers into lifeboats was so poorly managed that only 60% of the lifeboat capacity was filled.
What if the officers had boldly accepted the inevitability of the ship sinking early on and devised a plan to minimize the loss of life? It would not have takes any extraordinary leap of creativity to organize the crew and passenger volunteers to strip the ship of everything that floated - wooden deck chairs, etc. - and lash them together into rafts. Given the calm seas that night and the freezing water, just keeping people above water would have been enough.
Rather than promote the absurd charade that the ship was fine, just fine, when time was of the essence, the authorities could have rounded up the women and children and filled every seat on lifeboats. Of the 1,030 people who could not be placed in a lifeboat, 890 were crew members, including about 25 women. The crew members were almost all in the prime of life. If anyone could survive several hours on a partially-submerged raft, it would have been the crew. (The first rescue ship arrived about two hours after the Titanic sank.)
Would this hurried effort to save everyone on board have succeeded? At a minimum, it would have saved an additional 475 souls via a careful loading of the lifeboats to capacity, and if the makeshift rafts had offered any meaningful flotation at all, many more lives would have been saved. Rather than devote resources to maintaining the pretense of safety and order, what if the ship's leaders had focused their response around answering a simple question: what was needed for people to survive a freezing night once the lifeboats were filled and the ship sank?
I think you see the analogy to the present. Our leadership, such as it is, is devoting resources to maintaining the absurd pretense that everything will magically re-set to September 2019 if we just print enough money and bail out the financial Aristocracy.
Whether we realize it or not, we're responding with passive acceptance of oblivion. The economy and social order were precariously fragile before the pandemic, and now the fragilities are unraveling. We need to start thinking beyond pretense and PR."
- http://charleshughsmith.blogspot.com
○
Full screen mode recommended.
Posted by CoyotePrime at 11:06 AM