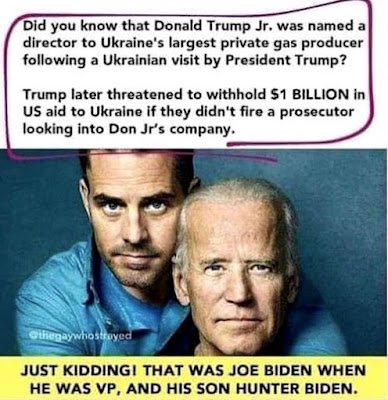 "The Clocks Struck Thirteen"
by Jim Kunstler
"Was it just me, or did you also notice that NBC’s Savannah Guthrie decided to play Special Prosecutor in Thursday night’s “town hall” gotcha-fest with Mr. Trump, who they had perched on some Modernista stool-of-punishment? The hectoring interrogation started from the get-go — the “townies” distributed around the set apparently just props — while Ms. Guthrie barked over the President with various renderings of the old shyster’s retort, but do you still beat your wife?
Over on ABC, Ol’ White Joe Biden lounged comfortably in low light and cushy seating with his therapist, George Stephanopoulos, free associating on the wonders and marvels he will bring about in the Kingdom Come of his presidency. Strangely, the subject of his family’s lucrative business dealings in Ukraine, China, and Russia a few years back never came up in the confab, a therapeutic omission that seemed to amount to malpractice.
I speak of the evidence found on a laptop computer apparently belonging to R. Hunter Biden, Ol’ White Joe’s crackhead son, outlining the many services Biden & Co. rendered to bigwigs in foreign lands for millions of dollars when Pop, “the big guy,” was vice-president. The Democrats’ new Ministry of Truth played a DEFCON-3 defense on these matters when it all broke in The New York Post at midweek. Twitter labeled it “unsafe” and banned all transmission of the news. Facebook’s Communication’s Director Andy Stone, a former Democratic Party employee (House Majority Political Action Committee Director; Press Secretary to Sen. Barbara Boxer), likewise squashed any links to the story on FB’s social network.
The New York Times rolled out the latest Ministry of Truth strategy Friday morning, in a tortured front-page story resorting to the tried-and-true claim that the laptop evidence was “Russian disinformation.” Sh’yeah…. The laptop had languished in the possession of Christopher Wray’s FBI since December 2019. The evidence contained in its some-40,000 emails pertained exactly to the matters at issue in the impeachment of President Trump at that time, i.e. Ukraine favor-seeking. The Delaware repair shop owner who handed over the machine burned a copy of its hard-drive, and when the FBI just sat on all that, he turned the drive over to Rudy Giuliani, one of the President’s attorneys.
One would have to suppose a number of things about these explosive revelations: For instance, that the FBI conducted some kind of forensic study of the laptop and its contents, and that it would not be too difficult to ascertain that the email trove was authentically the “work product” of R. Hunter Biden. If so, Mr. Wray has an awful lot to answer for.
Likewise, one might suppose that Rudy Giuliani, working on an extremely consequential case for a sitting president, and being a former distinguished federal attorney experienced with, and fastidious about, the handling of evidence, took some pains to ascertain the authenticity of the documents he received. Having done so, one might also suppose that Mr. Giuliani had handed off this material to the Attorney General, Mr. Barr — along with documentation he’s known to have collected about the Biden family’s money-laundering trail through the Baltic states to process additional payments for services rendered above and beyond the millions paid to R. Hunter Biden by Burisma, the Ukrainian gas company whose board of directors he was installed on in 2014.
What all that evidence speaks of is a Biden & Co. foreign influence-peddling scheme that amounts to selling out the USA while Ol’ White Joe was vice-president carrying out official tasks in the countries that paid his son enormous sums of money. The evidence clearly contradicts Mr. Biden’s basic claim that he never spoke with his son, Hunter, about his business dealings. The evidence also indicates clearly that Mr. Biden, then vice-president, received a cut of the collected lucre distributed among the family members. In a normal America, these issues would prompt some sort of official inquiry possibly leading to indictments. But these are the most abnormal times, and the final weeks of a vicious national election that is an existential threat to that coterie of Deep State seditionists whose careers, reputations, and livelihoods are at stake in the outcome.
So, of course, their Ministry of Truth is pulling out all the stops to squash the story. But their hubris is showing. Mark Zuckerberg of Facebook and Jack Dorsey of Twitter, being mega-billionaires, probably think that they have the resources to hire every attorney in the known universe to guard their empires. One important lesson for the nation might come out of this: that lawyers and lawfare do not amount to a supernatural protection force. The truth has a mighty power of its own and there are moments in history when it manages to overcome organized evil."
- https://kunstler.com/
○
Related:
"Ukrainian Lawmaker Releases Leaked Phone Calls of Biden and Poroshenko"
Posted by CoyotePrime at 7:22 AM