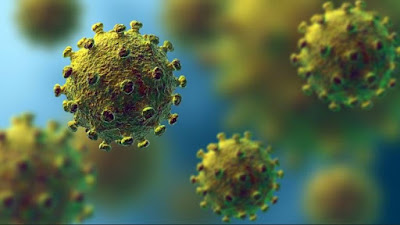 by David Leonhardt
10/15/20
"The surging virus: The autumn wave of the coronavirus has reached a dangerous new stage. The number of new daily cases has risen almost 50 percent in the U.S. over the past month. The situation is even worse in Europe. For the first time since late March, the per capita number of new cases in Europe exceeds the number in the U.S.: 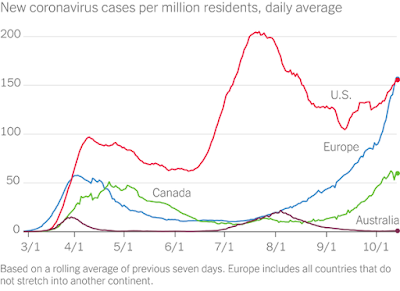 “The virus is everywhere in France,” the French president, Emmanuel Macron, said yesterday, while imposing a nighttime curfew in major cities. The onset of cooler weather, which is driving more people indoors, seems to be playing a big role. And many people seem to have grown tired of pandemic restrictions, leading politicians - in both Europe and the U.S. - to lift restrictions prematurely.
In late June, as The Times’s Mark Landler writes from Europe, residents in Prague held a dinner party stretching across the Charles Bridge to celebrate what they called - wrongly - the end of the outbreak. Italy and Spain welcomed summer tourists. But the pandemic hasn’t gone away. While treatments are getting better, many people are still dying - including almost 6,000 in India over the past week, 5,000 in the U.S., 1,700 in Iran, 850 in Spain and about 600 in both Britain and France. A widely available vaccine is still months away, even if the current research trials go well.
Amid all of this bad news, it’s worth keeping in mind that some countries continue to fight the virus successfully. The per capita rate of new cases in Canada is less than half as high as it is in the U.S. In Australia and much of Africa and Asia, the rate remains near zero. In many places where case counts are rising, political leaders are reluctant to impose new lockdowns, because the public is tired of them. But that creates something of a Catch-22: The most reliable way to reverse big outbreaks of this virus has been through strict crackdowns.
In the U.S.: The virus is spreading in every region, with the highest case counts in the South and Midwest, as you can see in these charts."

In other developments:
• After a huge aid expansion kept millions of people out of poverty this spring, the help is largely exhausted, and poverty in the U.S. has returned to levels higher than before the pandemic.
• A Sweet 16 party on Long Island led to a coronavirus outbreak that forced more than 270 people to quarantine. “Yeah, it wasn’t that sweet,” Gov. Andrew Cuomo said.
• Nick Saban, the head football coach at Alabama, tested positive. Two other colleges in his conference, Florida and L.S.U., postponed their next game after more than 20 Florida players contracted the virus.
• In the early days of the pandemic, President Trump assured Americans that the virus was nothing to be concerned about. Behind the scenes, his economic advisers were telling wealthy donors otherwise, a Times investigation found.
Oct 15, 2020, 12:17 AM ET:
Coronavirus Map: Tracking the Global Outbreak
The coronavirus pandemic has sickened more than 38,515,600
people, according to official counts, including 7,954,744 Americans.
Oct 15, 2020 12:17 AM ET:
Coronavirus in the U.S.: Latest Map and Case Count
◆ 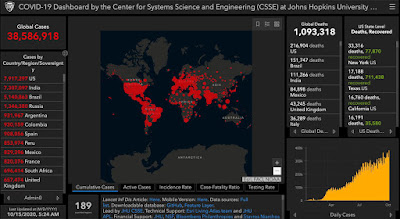 Click image for larger size.
- https://coronavirus.jhu.edu/map.html
◆
A highly recommended "must read":
"We Destroyed the World’s Greatest Economy for No Reason"
Posted by CoyotePrime at 6:04 AM