"Kicked in the Teeth by 'Stimulus'” 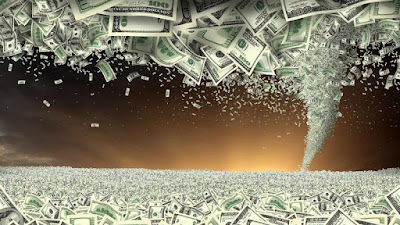 "Kicked in the Teeth by 'Stimulus'”
by Bill Bonner
"We like stimulus, we want stimulus. We think we should have stimulus."
– Donald Trump
SAN MARTIN, ARGENTINA – "As anticipated, the “recovery” is petering out. Here’s CNN: "Americans filed another 898,000 first-time jobless claims last week on a seasonally-adjusted basis, according to the Department of Labor. That’s more than economists had expected and up 53,000 from the prior week. Weekly claims have fallen a long way since peaking at 6.9 million in late March. But the improvements have slowed to a snail’s pace in recent weeks – and went into reverse last week. That means it could take a long time to get back to the pre-pandemic level of around 200,000 claims per week."
And here’s The New York Times: "8 Million Have Slipped Into Poverty Since May as Federal Aid Has Dried Up." "After an ambitious expansion of the safety net in the spring saved millions of people from poverty, the aid is now largely exhausted and poverty has returned to levels higher than before the coronavirus crisis, two new studies have found. The number of poor people has grown by eight million since May, according to researchers at Columbia University, after falling by four million at the pandemic’s start as a result of a $2 trillion emergency package known as the Cares Act."
Magic Elixir: And from colleague Dan Denning come further details… "Back-row America is getting kicked in the teeth… Check out the stats below from the Social Security Administration on wage earners.
• 32% of wage earners make less than $20k/year
• 44% make less than $30k
• 56% make less than $40k
• 66% make less than $50k
• The median wage for 2019, says Dan, was only $34,248.
And yet, these people – who can barely support themselves… and who have lost jobs and income in the COVID-19 lockdowns – are also expected to support 76 million retiring baby boomers. How’s that going to work?
Maybe more of the magic elixir – free money – is needed. Donald Trump certainly thinks so. On Fox Business yesterday: "President Trump called Thursday for even more stimulus spending than the $1.8 trillion proposed by Treasury Secretary Steven Mnuchin in his talks with House Speaker Nancy Pelosi (D-Calif.). “I would take more. I would go higher,” Trump said in an interview on Fox Business Network, repeating his directive from earlier in the week to “Go big or go home!” Trump said he’s communicated his views to Mnuchin. “I’ve told him. So far he hasn’t come home with the bacon.” Trump’s latest comments illustrate the fluid and disorganized state of affairs in the stimulus talks at a time when the economic recovery appears to be stalling.
Everything’s Fake: But the “recovery” is not stalling. It’s fake. And so is the stimulus that is supposed to help it. And the fakeness of it, like so many other things, is hidden by a mountain of phony numbers, fraudulent statistics, and fake money.
So far, it looks like the COVID-19 lockdowns have taken about 4.3% out of nominal GDP, according to the International Monetary Fund (IMF). Last year’s GDP was $21.4 trillion. This year, U.S. GDP will clock in at around $20.5 trillion. But… and this is a big BUT… that’s after the feds pumped in beaucoup money. For the sake of round numbers, we’ll say the total input, in extra federal spending – including the Paycheck Protection Program, $1,200 checks, and unemployment boosters – was between $3 and $4 trillion.
But… and this is an even bigger BUT… that printing-press money is not the same as real GDP. You can’t really replace honest output – goods and services that people are willing to pay for – with pieces of paper or electronic notations. And yet, this printing-press money is included in the GDP figures, as if it were real. Take it away, and the real GDP falls. How much? Hard to say, maybe by $3 trillion… maybe less… maybe more.
The flimflam is further disguised by “average” numbers. As we pointed out yesterday, if a single billionaire’s wealth goes up by 10%, 99 million people could get poorer… but the average would still be positive. The whole slimy edifice is fraudulent. Fake money. Fake GDP. Fake stimulus. Fake growth. Fake opinions. And fake numbers.
Chaos and Confusion: The feds are already $27 trillion in the hole… with a deficit this year that would embarrass even sh*thole countries. And yet, both Trump and the Democrats are planning on making it worse. How? With more fake, printing-press money, of course. But all the phony money does is distort, mislead, and cheat. Like all counterfeit money, it can make some people richer… but only by making others poorer.
Ninety percent of the nation’s financial assets are held by 10% of the people. Want to make them richer? Just give more counterfeit money to Wall Street. But the general effect is to cause chaos, confusion, and envy. That’s why one of the techniques of modern warfare is to counterfeit an enemy’s currency… hoping to wreck his economy.
Complex Web: But while you can make some people richer, there’s no case in history where “stimulus” has made most people richer. Most people rely on the economy for their income – not the stock market. And an economy is a complex web of give and take. Favor the savers and you punish the borrowers. Favor the exporters and you pinch the importers. Privilege the rich and you give the poor a kick in the teeth. Or, if you try to stimulate the whole economy – by dumping money from helicopters – all you do is raise prices and cause misery and pandemonium for everyone.
So… What’s the alternative? What choice do Trump or Biden have? What choice do voters have? Stay tuned for a look at the upcoming election and what it really means…"
- www.rogueeconomics.com
Posted by CoyotePrime at 11:53 AM