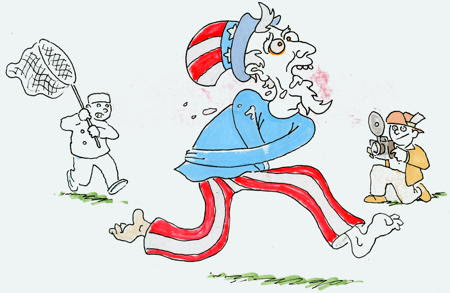 "Peak National Dysfunction"
by Jim Kunstler
"No need to argue anymore about defunding the police. The police across America have been successfully disarmed and castrated. Why would any cop with a sense of self-preservation interfere in the commission of a crime now? Just assume that the social contract is cancelled. You’re on your own.
Interesting factoids, by the way: rape reports are up 322 percent in New York City over the past year, shootings were up 97 percent and murders up 44 percent - a good start to the new era of all-against-all, where life is solitary, poor, nasty, brutish, and short. But don’t worry, Benjamin Crump and the legion of super-hero personal injury lawyers stand ready to enforce the suspension of law, seeking multi-million-dollar payouts in civil suits, such as the $27-million recently settled on the family of George Floyd, which is $27-million more than Jesus of Nazareth got for somewhat harsher treatment years back, though, according to House Speaker Nancy Pelosi, George Floyd has by far outpaced the old lord-and-savior in sheer saintliness mojo. Looks like George and Jesus will soon be vying for Speaker of Kingdom Come in the new, revised cosmos of American Wokery.
Anyway, New York’s City Council voted last month to end qualified immunity for police officers, which formerly shielded them from personal lawsuits in the performance of their duties. Predictable result: they will no longer perform their duties. This is on top of Mayor Bill de Blasio ending the age-old practice of posting bail for charged felons pending disposition of a criminal case. Meanwhile, the city’s main jail, Rikers Island, is scheduled to be closed down in 2026. Abolish incarceration! Well done, Big Apple!
For the moment, Derek Chauvin is on ice, having served his purpose as sacrificial goat in a trial that had all the fateful velocity of the Chattanooga Choo-choo. No need to rehearse the prejudicial actions of Rep Maxine Waters (D-Calif), oval office occupant Joe Biden, sidekick Kamala Harris, the Minneapolis Star-Tribune newspaper, Minnesota AG Keith Ellison, and other workers on the railroad of justice. The case will surely go into appeal and by the time it is finally adjudicated the old USA will be on ice, too - in the mortuary of lost civilizations.
Minneapolis police officer Kim Potter is teed-up next in the death of multiple felony suspect Daunte Wright, who was turning his life around when he made the split-second decision to evade arrest on an outstanding warrant for gun possession. And on deck: Columbus, Ohio, police officer Nicholas Reardon, who (it’s said all over Twitter and cable TV) unfairly interfered in a knife attack between a couple of girls just going about normal teenage girl stuff in their normal, playful way.
Critical Race Theory, and its enforcement arm, Systemic Racism, have got America in a full nelson, having put over the idea that any regulation of behavior among 13 percent of the US population is a crime against humanity - effectively rendering lawlessness a new social entitlement. Waiting to see how that works out as 2021 rolls forward. The weather didn’t cooperate much this week of the aforesaid events, so there was little action in the streets after the Chauvin verdict and all - except in Portland, Oregon, city of masochists, where the nightly riots continued as usual.
Is there a problem with all this? Only that the remaining 87 percent of the folks who live in the USA have so far failed to identify these operations for what they are, an epic hustle - by which I mean the seeking and acquiring of advantage, including large sums of money, by underhanded means. Sorry to tell you: the responsibility for this is on the 87 percent who are craven and feckless enough to allow themselves to be hustled. What’s the payoff for them in this game? A sense of radiant, self-informed moral purity for consenting to be coerced by the hustlers. The endorphin rush must really be something, a little like a snootful of fentanyl-and-meth.
Notice, too, how all this racial psychodrama is an effective smokescreen for other nefarious actions afoot by the Democratic Party. I refer to the various bills moving through Congress now to pack the Supreme Court, turn the District of Columbia into the 51st state (to gain two more senate seats), and to institutionalize voting fraud across all the states (HR-1). Not paying any attention to that? It’s just a gang of power-hungry maniacs trying to destroy your country. That is, unless Joe Biden & Co, manage to start World War Three in Ukraine or Taiwan before that bidness comes to vote. Oh, and here’s the moral of the story: life is tragic. Sometimes things don’t turn out… they just turn."
- https://kunstler.com/
Posted by CoyotePrime at 7:06 AM