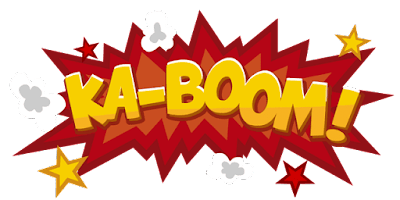 "Ka-Boom Time!"
by Bill Bonner
YOUGHAL, IRELAND – "What a jolly time. A boo… boo… ka-boom! JPMorgan Chase CEO and chairman Jamie Dimon sees it coming: "I have little doubt that with excess savings, new stimulus savings, huge deficit spending, more QE, a new potential infrastructure bill, a successful vaccine, and euphoria around the end of the pandemic, the U.S. economy will likely boom. This boom could easily run into 2023 because all the spending could extend well into 2023."
Yes… all that stimmy money… all that fake, new cash and credit… so many boondoggles… so many Madoffs… so little time. So many new “investments”… and with no sure money, no way to know what they are worth.
Here’s The Intelligencer with the boomy news: "Last week, fewer Americans applied for unemployment benefits than at any time since March 2020. Last month, retail sales in the U.S. rose by 9.8 percent, the largest increase in nearly a year. Factory activity in the state of New York just hit its highest level since 2017; in Philadelphia, manufacturers are now more confident about business conditions than they have been since 1973. As of this writing, U.S. stock values have hit an all-time high. All of this news is better than expected. And yet the yield on U.S. Treasury bonds declined Thursday morning - a sign that global investors believe America can have its post-COVID economic boom and its low inflation, too."
Two Kinds of Boom: Yes, but wait. The trouble with booms is that there is more than one kind. There’s the kind of boom that makes people richer. And there’s the kind of boom that makes them poorer. A further complication is that, in the early stages, it’s hard to tell the two apart. A real boom – based on working, saving, investing, and innovating – makes you richer and better off. The other kind… the fake boom… is another thing altogether. You just print up some money and pass it out all over town.
Pretty soon, things start to happen. Even “better than expected” things. People spend. Cash registers make a joyful sound – ka-ching! – especially the ones in China, Vietnam, and Mexico, where Americans tend to spend most of their stimmy money. The last 12 months were unique in that respect. Shutting down the local service economy – restaurants, bars, hotels, and theaters – left Americans with money on their hands. What did they do with it? They bought new refrigerators. Spending on “consumer durables” rose 17% over the last 12 months, partly explaining last month’s almost 7% rise in import prices.
A fake boom doesn’t add to prosperity; it reduces it, by squandering real wealth – time and resources – on projects that don’t pay off. Giveaways, for example. Political payoffs. And bad investments. More money for the unemployed. More for Amtrak. More for “socially disadvantaged farmers.” And more money for cryptos, SPACs , NFTs, and Elon Musk.
Parade of Lunacy: But at least a fake boom is more entertaining than a real boom. The latter is all sobriety and hard work, while the former sets in motion a glorious parade of lunacy. Here at the Diary, we watch them go by – the madmen… the imposters… the shysters… and the world improvers. We gawk. We salute. We toss confetti. We would shake up a bottle of champagne and spray it over them… if we were that sort of fellow.
If only you could get rich by spending money you don’t have on things you can’t afford and don’t really need anyway! But you can’t. And over time, every detail of the fake boom is destined to be exposed as counterfeit. Especially the “low inflation.”
The feds are now proposing a 50-year Treasury bond to let investors take advantage of the next half-century of stable prices. So you see, even they haven’t completely lost their sense of humor. Or else they are insane, too.
What Inflation Looks Like: When you increase the supply of money – with no offsetting increase in goods and services – you should expect rising prices. But not always where or when you expect them. The monetary foundation of the U.S. used to be in Fort Knox. But now, since there is no longer any connection between U.S. gold and U.S. money, the closest thing to a monetary base is the Federal Reserve’s balance sheet. That tells us how much new money the Fed has “printed.”
When the 21st century began, the Fed’s balance sheet stood at about $600 billion. Today, it is almost $8 trillion, with nearly half of that added in the last 12 months alone. 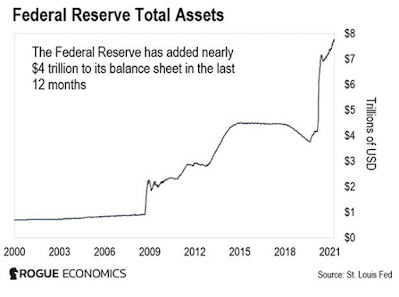 It Also Looks Like This: The Fed’s balance sheet is what enables so much federal borrowing… and U.S. debt. 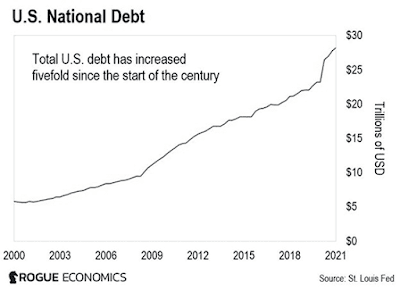 The U.S. borrows by selling bonds. Grosso modo, the Fed buys them with money it specially creates for the occasion. The total U.S. debt at the beginning of the 21st century stood at $5.7 trillion. Twenty-one years later, the total is over $28 trillion.
That’s inflation too, right there – in the federales’ accounts. It has already disrupted the financial system and corrupted capitalism. Companies no longer invest their capital to earn more capital; now, they buy their own shares… or, like MicroStrategy (MSTR), they buy bitcoin (more below). After all, the central bank has been lending money to its member banks at below zero (below the real rate of inflation) for most of the last 11 years. That alone is bound to cause distortions.
Freak Show: We’ve enjoyed laughing at some of these grotesqueries over the last few days and weeks – Dogecoin, MicroStrategy (a company whose business strategy is simply to turn itself into a bag of bitcoin), a single-pixel NFT, Tesla (TSLA)… the list is long, and includes the nearly 40% of small-cap companies on the Russell 2000 index that are not profitable.
Bitcoin rose eight times in the last 12 months. Dogecoin is up almost 8,000% since the beginning of the year. And household financial assets, which include stocks and bonds as well as savings accounts, have gone up nearly twice as fast as GDP for the last 30 years.
Last week, the press added another freak to the show – reporting that a single deli in New Jersey, serving some $14,000 worth of sandwiches in 2020, sported a market cap of more than $100 million. 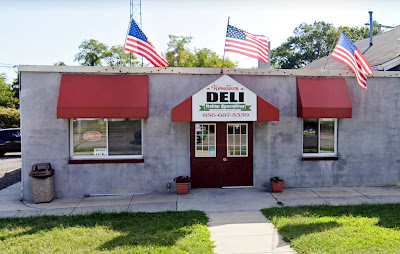 Over at Bloomberg, Matt Levine pointed out that after the news came out, the deli became the “laughingstock” of the financial world. There is no way the deli is really worth $100 million. And everybody knows it. But such are the marvels of the late Bubble Epoch that we no longer know what anything is really worth.
Big Joke: After chuckling at the deli story all weekend, Matt Levine checked trading yesterday. Trading volume on the tiny flimflam had soared. But the company was still worth more than $100,000,000. Traders didn’t seem to care that it was an absurd price. It’s all part of the joke. “You bought the deli? Ha… ha… ha…” That’s inflation. Yuck it up while you can."
- www.rogueeconomics.com
Posted by CoyotePrime at 11:30 AM