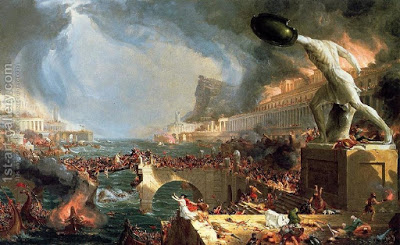 “Societal Collapse”
by Hardscrabble Farmer
“Anyone interested in understanding the mechanics of human history must first and foremost understand the cycles of Nature and the nature of living things. There exists a balance in every closed system; creation and dissolution, growth and decay, life and death. There is no escape from this dynamic, no means by which one can exist without the other. Sometimes societies ascend, but eventually, over time, they collapse.
For a very long time America has benefited from exploiting the reserves of other nations – their labor, their resources, and their environments in a form of cultural strip mining. It has given the appearance of a sustainable system that required no effort to store surpluses or to build reserves for the future. There has been a perpetual live for the moment feel to our experience that was based on such illusory systems as credit and fiat.
These things are not real. They are manifest realities, things that exist only because a critical mass of people agree to believe in them rather than what is reflected by actuality. When such time occurs that a large enough number of people abandon their participation in that system, reality rushes in to the void left behind.
A large part of what we are seeing – as described to us by experts or media – is occult in nature, hidden not by design or subterfuge, but due to the ignorance or stupidity of the mass of men. They no longer recognize that a large part of what is taking place on the streets of cities like Portland and Minneapolis is simply a mating ritual for a generation that was so atomized and dissolute that they had no opportunity to make real life connections with the opposite sex except through electronic devices. Living beings cannot- despite the assurances of the Musks and Weils- exist by proxy.
They must eat, sleep, perform some activity during their waking hours, seek companionship, etc. These drives can be sublimated or suppressed either by societal controls or chemical dependencies, but they cannot be removed from our core drive. This is what happens when humans are thwarted from fulfilling their animal destinies – the drives of their particular species. If you eliminate the family, you do not stop fornication. If you eradicate healthy foods and a connection to its production, you do not eliminate hunger. Thus the dramatic rise in obesity and the ubiquity of pornography.
Everything exists in context, there is no way to eliminate the void left behind in a fatherless home without a corresponding flow of the feminine. A mind that has no reason will seek to replace it with an equal measure of emotion.
The Western Cultural experience that gained prominence and near global hegemony over the past several centuries is in terminal decline, accelerated by the opportunistic interference of competing cultural spheres, but predominantly by its own senescence. We are, in short, spent. What we are seeing is not a political or ideological struggle – again, manifest realities – but the natural process of a cultural expiration. The West is dying and with it all of the ideals and symbols that were attached to its rise.
Just as an elderly family member in their last days makes a point to give away their possessions, America is passing its treasures on; freedom of speech, the iconic symbols of Manifest Destiny like the statues of its heroes, even its own birthright to the rising of a new cultural expression, one that is less concerned with things like honor, nobility, truth and justice. None of those things exist in Nature, but rather are created and used like iron tools to achieve an end. Now that its energy is spent they serve no purpose, especially to the multitudes of others who share a far more dynamic and exuberant expression of collective identity.
This is a natural event, no different from a forest fire, but one which applies to the human species specifically. This is how we clear the ground for whatever is to replace us and we will serve as its fertilizer.”
- https://www.theburningplatform.com/
Posted by CoyotePrime at 9:57 AM