Chet Raymo, “The Ring of Truth” 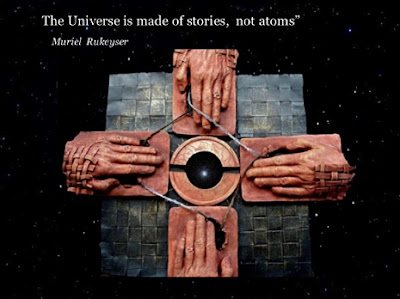 “The Ring of Truth”
by Chet Raymo
“In Salley Vickers’ novel, “Where Three Roads Meet,” the shade of Tiresias, the blind seer of the Oedipus myth, visits Sigmund Freud in London during the psychoanalyst’s final terrible illness. In a series of conversations, Tiresias retells the story of Oedipus - he who was fated to kill his father and sleep with his mother – a story at the heart of Freud’s own theory of the human psyche. At one point in the conversations, as Tiresias and Freud discuss the extent to which our lives are fated, the question of immortality arises. Freud says of Oedipus that “he made his story into an immortal one, so far as any story is.” And Tiresias replies, “But, Dr. Freud, stories are all we humans have to make us immortal.”
Oedipus lives on, whether he lived or not in actuality. Sophocles lives in our consciousness as vigorously as ever he did in life. They live because their stories touch something resonant and unchanging in human nature. Vickers suggests that what makes the Oedipal story immortal is not any necessary tendency of humans to act out the Oedipal myth, a la Freud, but rather Oedipus’s rage to know the truth - or become conscious of a truth he has known all along and suppressed – even though the truth will be his undoing.
The poet Muriel Rukesyser got it exactly right when she said: “The universe is made of stories, not atoms.” Even atoms are stories we tell about the world, having first paid close attention to how the world works. The plays of Sophocles and the other Greek dramatists live on not because their authors were immortal, but because nature endures and their stories tell us something that rings true about enduring nature. And, like Oedipus, we have a rage to know, even if knowledge will unseat some of our more comfortable illusions.”
- http://blog.sciencemusings.com/
Posted by CoyotePrime at 2:31 PM