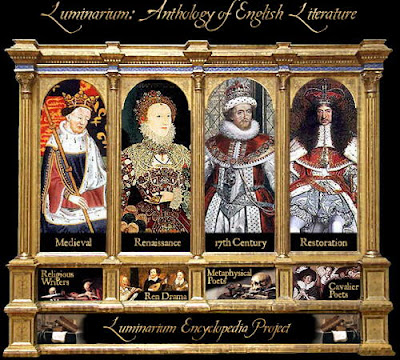 “Luminarium”
by Anniina Jokinen
“This site combines several sites first created in 1996 to provide a starting point for students and enthusiasts of English Literature. Nothing replaces a quality library, but hopefully this site will help fill the needs of those who have not access to one. Many works from Medieval, Renaissance, Seventeenth and Eighteenth centuries can be found here.
The site started in early 1996. I remember looking for essays to spark an idea for a survey class I was taking at the time. It seemed that finding study materials online was prohibitively difficult and time-consuming - there was no all-encompassing site which could have assisted me in my search. I started the site as a public service, because I myself had to waste so much time as a student, trying to find anything useful or interesting. There were only a handful of sites back then (read: Internet Dark Ages) and I could spend hours on search engines, looking for just a few things. I realized I must not be the only one in the predicament and started a simple one-page site of links to Middle English Literature. That page was soon followed by a Renaissance site.
Gradually it became obvious that the number of resources was ungainly for such a simple design. It was then that the multi-page “Medlit” and “Renlit” pages were created, around July 1996. That structure is still the same today. In September 1996, I started creating the “Sevenlit” site, launched in November. I realized the need to somehow unite all three sites, and that led to the creation of Luminarium. I chose the name, which is Latin for “lantern,” because I wanted the site to be a beacon of light in the darkness. It was also befitting for a site containing authors considered “luminaries” of English literature.
I wanted the site to be a multimedia experience in the periods. I find it easier to visualize what I am reading when there is a small illustration or a tidbit about the background of the author or his work. The music and art of the period serve to complement one’s rational experience of the site with the emotional. There are people who write to me who seem to think that if something has a beautiful wrapping, it cannot possibly have scholarly insides. But I do not see why something scholarly cannot at the same time be attractive. It is that marriage of form and function, so celebrated during the Renaissance, for which my site strives.”
- http://www.luminarium.org/
•
This is a unique source of endless wonder, a treasure, for those who
love the English language. You’ll spend many enjoyable hours here…
- CP
Posted by CoyotePrime at 2:06 PM