Chet Raymo, “A Few Words Inspired By The Tomato Plant” 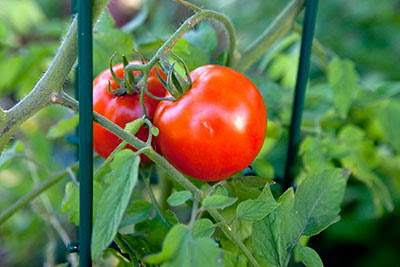 “A Few Words Inspired By The Tomato Plant”
by Chet Raymo
"Mostly we think of life in terms of individuals - this person, this tomato plant, this frog, this oak tree, this gnat. And we talk about birth and death as the beginning and ending of life. But there is another sense in which life is just one thing, whose beginning is lost in the depths of time and whose end is not in sight. Life in this sense embodies itself in matter, temporarily, as a tomato or a frog, puts on matter and puts off matter as we might don or doff clothes. By this account, I am an ephemeral conglomeration of atoms that life is using to perpetuate itself.
But what is this thing called life? It cannot exist except as embodied form, but it maintains a continuity independent of any particular embodiment. It is a strange enduring wave that stirs the material world into purposeful and directed avenues. With Johannes Kepler we might call it the facultas formatrix of nature, the formative faculty, but giving something a name doesn't explain it. Whatever life is - in the unitary, enduring sense - it would be surprising if it only existed here on Earth. If I were a betting man I would bet that life is as pervasive as matter itself, or energy. Matter, energy and complexification. We have lots left to learn.
But let's be cautious. There are lots of folks out there with half-baked biocentric theories of the universe. Someone once chided the philosopher W. V. O. Quine with a quote from Shakespeare: “There are more things in heaven and earth than are dreamt of in your philosophy.” To which Quine is said to have responded: “Possibly, but my concern is that there not be more things in my philosophy than are in heaven and earth.”
- http://blog.sciencemusings.com/
Posted by CoyotePrime at 8:31 PM