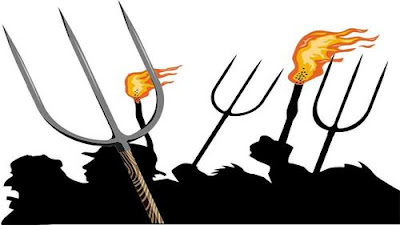 "The People Have Lost Faith In The State,
And The State Has Lost Faith In Its People"
by Charles Hugh Smith
"Democracy is fundamentally about advocacy: the people are free to advocate for their interests and form groups to represent their shared interests. In the broadest scope, the people are free to advocate for what they hold as the common good, policies and programs that benefit the entire populace rather than one special-interest group.
Since the state (all levels of government) concentrates wealth and power via taxation and a monopoly on force, groups advocate/lobby the state to recognize and respond to their interests. At the local level, this advocacy entails contacting city council members, speaking at council meetings, developing outreach tools (email lists, website, etc.), holding rallies at city hall, etc.
People advocate when they still have faith in their government. When they lose that faith, their only option is dissent. When advocacy yields zero results because government really only responds to corporations and the super-wealthy, then people lose faith in the representational branch of the state. Since advocacy failed, people dissent, protesting government policies, rallying behind alternative policies and demanding a hearing of their concerns and interests.
The state tolerates polite advocacy because it is easily dismissed, but it views dissent as a threat, and responds accordingly. The state's elected officials and unelected functionaries view citizen advocacy as an annoyance, but dissent is understood as a direct challenge to the state's monopoly on force and its concentration of wealth via taxation, and a challenge to the state's freedom to exercise its powers whenever and however it wants.
Dissent is thus intolerable, especially if it demands transparency, which threatens the cozy corruption of politicos and functionaries, or threatens the wealth and power of the parasitic elites that control virtually all the nation's wealth and power.
This study of political influence and state policy decisions found that the average citizenry had zero influence: "Testing Theories of American Politics: Elites, Interest Groups, and Average Citizens."
Note the difference between conventional wealth and super-wealth. Someone earning $500,000 is wealthy to the average wage earner, but that individual pays 40+% in taxes, so they net less than $300,000, and if they live in high-cost states and have elderly parents in assisted living and kids in university, their income available to lobby the state is inconsequential compared to the tens of millions of dollars corporations and the super-wealthy routinely spend to cement their political influence.
When the people realize advocacy is an empty promise of political influence and they move to dissent, the state's powers of suppression are unleashed. This includes the judiciary (one set of oppressive laws for the average citizen, and another for the corporations and super-wealthy), law enforcement and the security agencies, which are now in bed with the Big Tech monopolies which can effortlessly suppress free speech by banning or shadow-banning dissenters, all under the convenient guise of "banning disinformation."
When the state views dissent as an existential threat to its monopoly powers, it has lost faith in its own citizenry. Fearful that the citizenry might not approve of the corruption of political deal-making and the state's Imperial machinations globally, the state devotes enormous resources to hiding its actions, policies and intentions. Since the citizenry can't be trusted with the truth, lest they disagree with the elites' choices, whistleblowers are savagely punished and dissenters are marginalized, suppressed or silenced.
As dissent is crushed, the citizenry lose faith in the state's judiciary, law enforcement, taxation and security agencies - in effect, faith in the state is completely destroyed. Once self-serving elites control the state, dissent cannot be tolerated, as the parasitic elites' hold on power is illegitimate and thus precarious. This is why whistleblowers pose such an existential threat to a thoroughly corrupt, debauched, incompetent self-serving state. 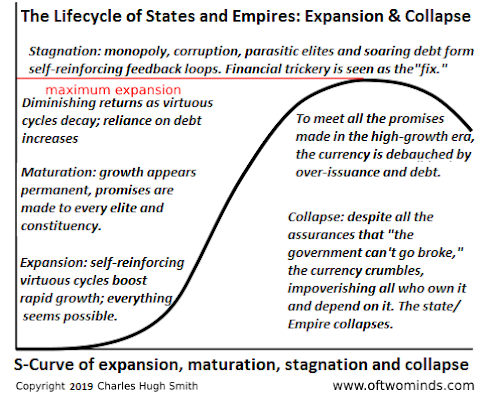 This is how states and empires decay and slide into the dustbin of history. When the citizenry lose faith in the state and the state has lost faith in its citizenry, then everything become theater and artifice: the pantomime of elections, the carefully curated simulacra of "free speech," (free as long as you mouth the approved narratives), the flood of absurd promises (free money for everyone forever!) that can never be fulfilled, the tiresome parade of politically expedient fake-fixes, a central bank slavishly devoted to expanding already jaw-dropping wealth and income inequality, and a political leadership so clueless they believe their pathetic strutting on stage is actually persuading the audience of their competence and sincerity."
- http://charleshughsmith.blogspot.com/
- https://www.zerohedge.com/
Posted by CoyotePrime at 3:53 PM