"Seven Things Nobody Talks About That Will Eventually Matter - A Lot" 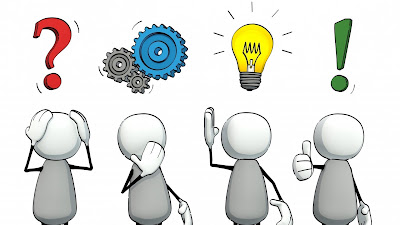 "Seven Things Nobody Talks About
That Will Eventually Matter - A Lot"
by Charles Hugh Smith
"Perhaps it shouldn't surprise us that everything that will eventually matter is ignored until it does matter - but by then it's too late. Here's a short list to start the discussion:
1. The Federal Reserve has transformed the American populace into a nation of dismayingly over-confident gamblers. I've been writing about moral hazard - the separation of risk from consequence - since 2011. Punters who are insulated from risk will have an insatiable appetite for risky bets, which is precisely what we see on a mass scale, as the confidence that the Fed will never let markets drop is 99.99% because the Fed has indeed reversed every decline, no matter how modest, month after month, year after year.
The Fed has perfected moral hazard: everyone from the money manager betting billions to the punters gambling their stimmy money is absolutely confident I can't lose because the Fed will always push the market higher. Hence the advice to never sell and keep increasing the size of one's bets because losing is transitory (heh).
2. The Fed's perfection of moral hazard radically incentivizes increasing debt and leverage to maximize one's bets because the bigger the bet, the bigger the payoff - the Fed guarantees it! Margin debt is at extremes, and many wildly successful stock and options punters have reaped fantastic gains by maxing out their Robinhood margin as their winnings increase. Since the Fed guarantees that anyone holding until the Fed gooses markets higher will be a winner, maximizing leverage is completely rational: hedging is a foolish waste of money that could have been placed on a sure winner - any long bet.
Margin and shadow-banking leverage is through the roof, but nobody sees any risk from this extreme expansion of debt and leverage. Never mind that leverage unwinds faster than it builds...
3. As longtime technician Louise Yamada reminds us, volume is the weapon of the Bull. Yet volume is lower than the holiday season before New Years. The Bull is nowhere in sight if we look at volume, yet every new high is proof-positive that the Fed doesn't need no stinkin' volume - markets will loft higher forever with or without volume. OK, if you say so...
4. Inflation is Kryptonite for markets, yet nobody feels any need to discount the possibility that inflation isn't "transitory". There are numerous reasons to doubt the Fed's bleatings, reasons I've laid out in
• "The Fed Is Wrong: Inflation Is Sticky"
• "The Sources of Rip-Your-Face-Off Inflation Few Dare Discuss"
• "A Couple Things About Inflation"
5. Everyone seems to be assuming the calendar has been reset to September 2019 with absolutely nothing different, yet profound cultural changes have occured beneath the status quo's radar. I addressed a few of these cultural shifts in
• "Post-Pandemic Metamorphosis: Never Going Back"
• "The 'Take This Job and Shove It' Recession"
The incentives to opt-out - and the quiet time needed to realize this provided by the lockdown - are weighing on the entire spectrum of the workforce from professionals to the working poor. But conventional pundits are blind to the consequences of 'Take This Job and Shove It'.
6. The insanity of leaving the nation dependent on foreign suppliers for essentials goes largely unremarked. Never mind the national security risks - all that matters is Corporate America squeezing the last few dollars of profits out of the dead carcass of globalization.
7. Nobody seems to notice the diminishing returns on Fed manipulation, oops, I mean intervention: what $1 trillion accomplished 12 years ago takes almost $4 trillion - and what about the next fireball of deleveraging/margin calls? What will that take to reverse? $8 trillion? $10 trillion? And all of that will be consequence-free, no matter how bloviated? If you say so..." 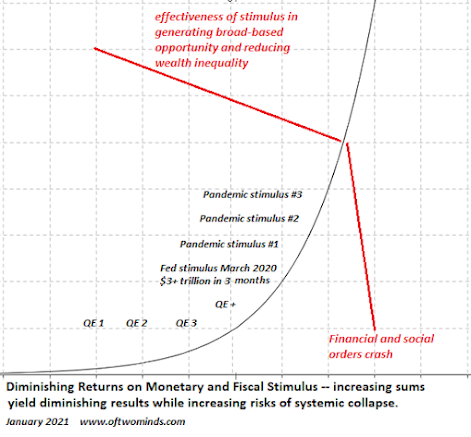